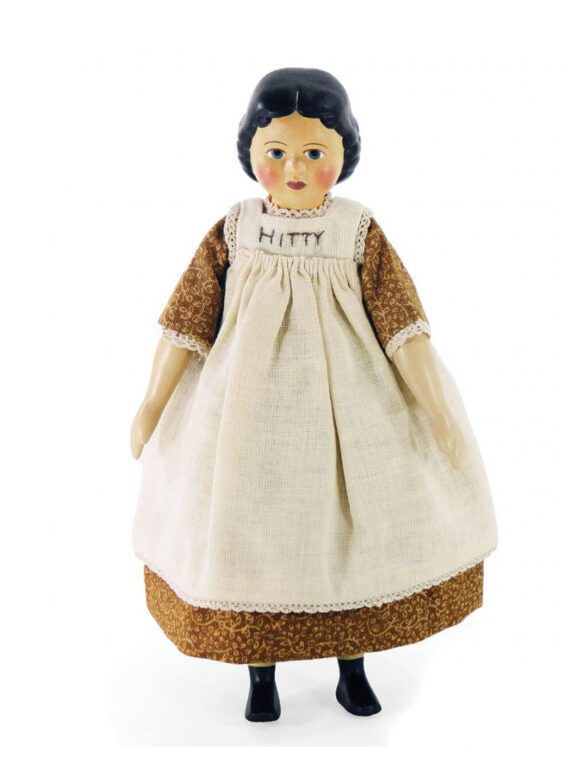 From our 100 Maine Books package: A 1929 children's book about a doll from Maine inspires a modern-day subculture.

Phil Whitney’s family ties to Great Cranberry Island stretch to the 1700s, yet he’d never heard of Hitty Preble until he retired there and helped open the Great Cranberry Island Historical Society museum in 2008. Then came the steady trickle of visitors asking about Hitty, a small wooden peg doll made famous in 1929 by author Rachel Field.

Field, who found the doll in a New York antiques shop, cast Hitty as the narrator of her Newbery Medal–winning children’s novel, Hitty: Her First Hundred Years. Hitty’s tale begins in the 19th century on Great Cranberry and circumnavigates the globe as she passes from owner to owner. For the museum, the historical society researched Field’s connections to the island — it was her favorite vacation destination — and assembled a Hitty exhibit. “I was surprised at how many people from all over the country are interested in Hitty,” Whitney says. “We even had a special Hitty day on what turned out to be the worst weather day of the year, and still, 50 to 75 die-hard fans came.”

Devotees are mostly older women who collect all sorts of dolls, but Hitty comes with a distinct culture, says Julie DeGroat, a New York maker of fabric Hittys and founder of the online club Hitty Girls. Collectors share photos of Hitty in Hitty-size rooms with Hitty-size furniture. They take Hitty on trips — she’s a world traveler, remember — and pose her in front of landmarks like the Eiffel Tower.

Rachel Field’s Hitty, who resides at the public library in Field’s hometown of Stockbridge, Massachusetts, is one of a kind, probably carved from scrap by a sailor in the 19th century. Few rules dictate her contemporary doppelgangers’ DNA, says New Hampshire doll maker Gail Wilson, who has made thousands of Hittys in clay, papier-mâché, and wood. However, Hitty should look antique and have dark hair (blondes and redheads are friends). Most important, is Hitty’s size, about 6 ½ inches tall. “The magic of Hitty isn’t that she’s made of wood, it’s that she’s small,” Wilson believes. “That’s essential to her story — it’s how she fits in all these places and travels the world.”