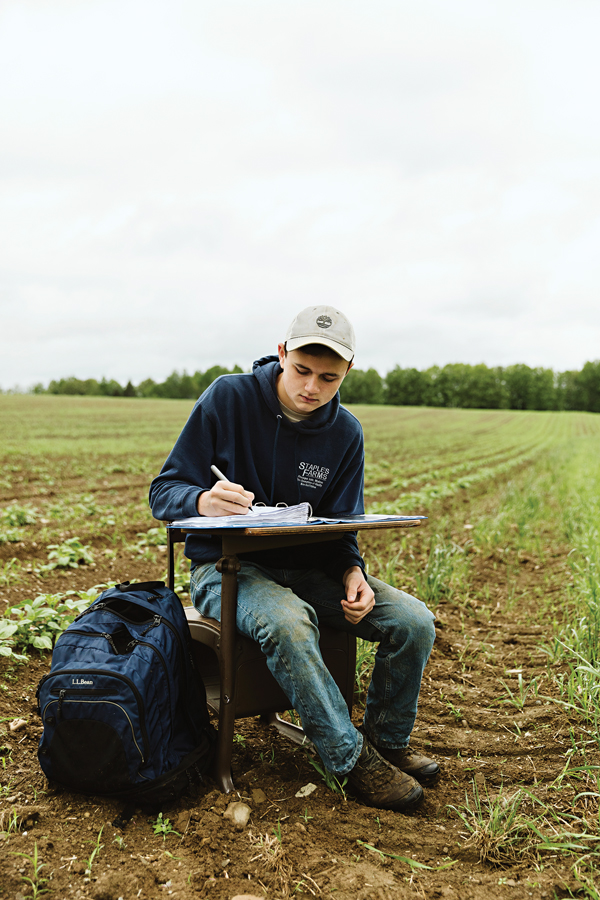 The concept is foreign to folks not from Aroostook County: an annual three-week school break so that students can pick potatoes. Presque Isle High School principal Ben Greenlaw asked around recently, and as best he can tell, the tradition goes back at least 60 years. But spud acreage in The County has dwindled — from 200,000 acres a few decades ago to fewer than 50,000 — and with mechanical harvesters, farmers need less help.

So some districts in The County have canceled the break, and others have considered doing the same. Lately, School Administrative District 1, comprising Presque Isle and its surrounding communities, has been at the center of the potato-harvest debate. Last year, the school board voted to cancel the break, but after an outcry from both farmers and a contingent of students and parents, the board reversed the decision.

Still, most kids don’t seem to have much interest in getting their hands dirty these days. Last year, only 81 of 527 Presque Isle high schoolers used the time off to work the harvest, Greenlaw says (while another 154 used the break for non-harvest-related jobs). One of the farmhands was Ian MacKinnon. Now a junior, he’s headed to Staples Farm again this fall to help the 400-acre, family-run operation bring in its crop. He first worked there in sixth grade, picking rocks out of the field. Now, he puts in 60 hours a week sorting through countless spuds as they tumble past on a conveyor belt.

So you must meet a lot of potatoes during those few weeks.

They come in on trucks from the harvester, and then we sift out all the rocks and grass. I’ve also seen a lot of horseshoes. I’ve seen some boots and gloves and clothes. A lot of golf balls. My jeans get stained with dirt, and I have to clean out my car every week — it’ll have about an inch of dirt on the floor.

Are your classmates missing out if they don’t work?

I find that people who actually work it are more go-getters and try to make something of themselves. Those who don’t, they play video games or just make excuses. ‘Oh, I’m too busy,’ you know? And they sit at home all the time.

What’s the benefit of participating in the harvest?

A lot of people don’t understand what you really have to do to make some money around here. Besides the money, which I use to pay for car insurance, I guess it’s just work ethic.

You must get pretty tired of seeing potatoes, though.

Toward the end, it was getting a little old, but it’s better than working at a grocery store or McDonald’s. I learned how to drive a tractor, a forklift, a pay loader, tons of different equipment. I actually had a good time, and I learned more working the harvest than I would have at school — no joking.

Do you run into kids from elsewhere who don’t know about the potato break?

A kid from the Houlton golf team was just so mind-blown at the fact. And I have a cousin who lives in Paris [France], and when they get time off, they just get to relax. He’s like, “You actually worked?”

What should the school board do about the break?

Last year, there was a community forum where all the farmers came, and I went and spoke at it because I wanted to support the break. I don’t think the school board really realizes how much work goes into the harvest. I told them it’s important not only for farmers but students too.