If you had driven down the Blue Hill Peninsula 10 years ago, over the winding two-lane road edged with stones, past the mist-covered yards stacked with neon-bright lobster traps, all the way to Stonington, at the southern end of Deer Isle, you might have happened upon Geoffrey Warner happily making one-of-a-kind wood furniture in his roadside gallery. Built on commission, his sinuous dining chairs and bold, live-edge coffee tables were shipped to wealthy clients in Philadelphia and New York as new orders rolled in by word of mouth.

Two years later, the economy collapsed, and Warner was suddenly concerned about his livelihood. Determined not to let his studio and workshop sit idle, he called a series of “out of the box” meetings with other local craftsmen. Together they perched on his handmade furniture and brainstormed ways to get through the recession. “We were all designers: by definition, that makes us problem-solvers,” Warner explains. “We needed to apply our skills to finding a way to design beautiful products that could be made on a scale that keeps the costs and the price point down.” 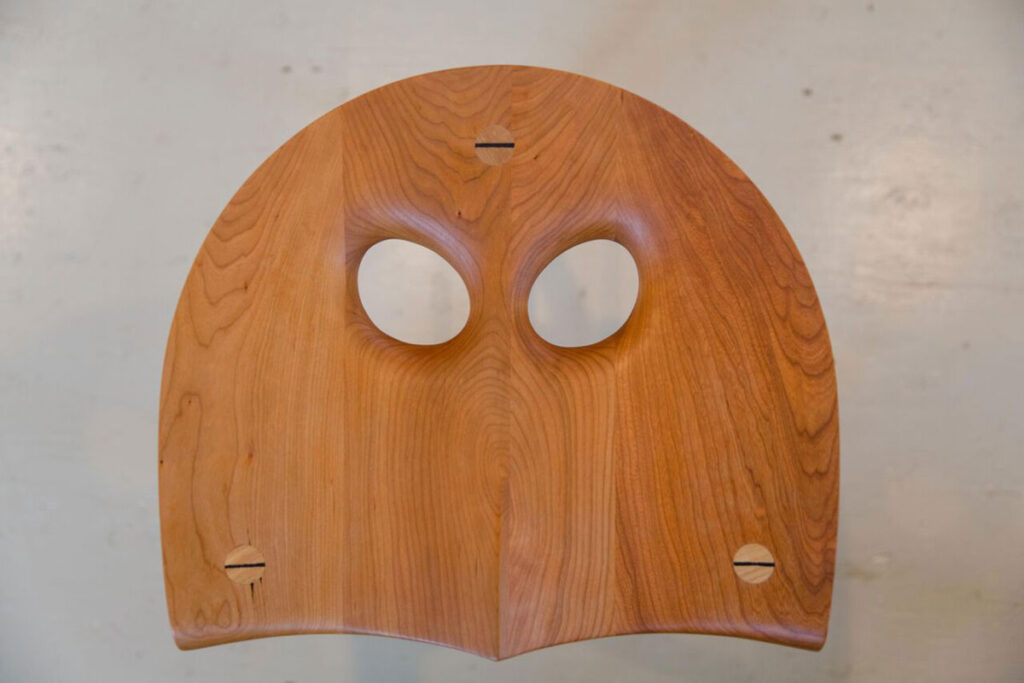 Warner followed through and thrived, crediting his success in part to a serendipitous mistake: While carving out the depressions in a seat form designed to alleviate pressure on the ischium, or sit, bones, Warner went right through the wood, forming two holes. But instead of trashing the seat, which resembled the head of a wide-eyed owl, he took it to a local chiropractor, who recommended some adjustments. The result was a stool so uncommonly comfortable that users found they just naturally sat up straight. Some customers — many of them chiropractors, nurses, and other healthcare professionals — even reported that switching to the stool relieved their chronic back pain, so Warner sought and received a Maine Technology Institute grant to fund an analytical study. US Ergonomics, a laboratory that does ergonomic product testing, found that Warner’s Owl Stool eases the pressure on the sit bones of most people, reducing the need to constantly shift positions and slouch.

Inspired by that report, Warner’s latest entrepreneurial brainstorm is to market the stool to healthcare and business professionals. The Pro Owl is a patent-pending model with a rolling base and adjustable height for people who need to scoot around while seated. “I spend a lot of time figuring out how to take the company to the next level,” Warner says. “How are we going to sell a thousand stools a year instead of a few hundred?” He sought advice from Tom Gallant of the Maine Small Business Development Centers on how to break into the dental market, hired a national sales manager, and is networking with other American ergonomic furniture designers. Owl Furniture is also setting its round eyes on Florida, where a woman who teaches kayaking to seniors has been using the stools in her boats.

With just two employees — a full-time shop foreman and a part-time business office manager — Warner is focused on smart growth and lean manufacturing, so he is continually tweaking his process and his products, which include the Owl Furniture line of cherry, walnut, and ash stools and chairs, as well as a variety of commissioned pieces. He sources some parts from likeminded vendors: an Amish company in Ohio produces supple steam-bent chair arms, and the metal bases on the Pro model are made in North Carolina, then drop-shipped to Performance Product Painting in Auburn, where they are powder-coated in cheerful colors inspired by the palette of Maine fiber artist Nanne Kennedy. Everything is assembled in Stonington. Warner and shop foreman Allan Hagerthy can turn out a completed owl stool in two hours. “I was a woodworker before, building off other people’s plans,” says Hagerthy, who grew up on the island and considers himself to be an apprentice as well as foreman. “Geoff’s a creator, so here, I get to be on the inside of the design process.”

To keep up with demand, Warner has built a new space for shipping, packing, inventory, and finishing, and he travels with his stools and other pieces to about a dozen fine craft and industry shows a year. He intends to keep the grassroots end of the business intact. He brings his lower-price-point ($360–$395) Owl Stools — the three- and four-legged Classics and the OM Meditation Stool — to area farmers’ markets, food co-ops, and other places where health-conscious types gather, and calls this “guerrilla marketing: creative, fun, whimsical, and no-cost.” He also sells a do-it-yourself kit for $195, and offers workshops in which students can build their own Owl Stool in one day.

[infobox maintitle=”“To keep a company going in a small fishing village at the end of the world, you need tons of tenacity.”” subtitle=”Geoffrey Warner” bg=”black” color=”white” opacity=”off” space=”60″ link=”no link”]

The son of a Providence architect, Warner grew up playing music, and an early job learning to build guitars with Ron Pinkham of Woodsound Studio in Rockport led him to a career in carpentry and furniture making. After years of travel and a foundational experience studying with Tage Frid, then the head of the Furniture Design department at Rhode Island School of Design, Warner returned to Maine with his family in the mid-1990s, building his own post-and-beam house on a cove in Deer Isle. As much as he invests in the multi-faceted approach to running a business, Warner says he is happiest when he can focus on just one thing at a time. “I love when I can be in the moment, whether designing or building or walking away from a booth we’ve just set up at a show, knowing I’ll get to come back and engage with other people,” he says. “To keep a company going in a small fishing village at the end of the world, you need tons of tenacity,” Warner says. “You have to be fearless, but you also have to be connected to your place and your vision.” Then, quoting a lecture by Stuart Kestenbaum, the director the Haystack Mountain School of Crafts, Warner ticks off the three pillars of success in Maine’s unique culture: “Community, ecology, and economy,” he says, “like the three solid legs of a stool.”