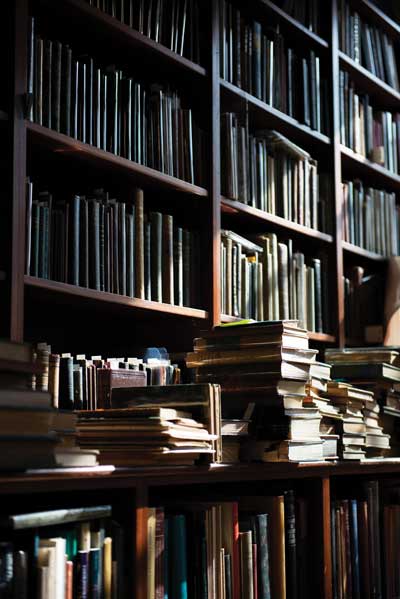 Don and Samantha Lindgren moved from New York to Maine 15 years ago. Over a pizza lunch in the Old Port, Don, a rare-books dealer, and Samantha, a pastry chef, hashed out a business plan on a napkin, and soon they had a bookshop, Rabelais, devoted to food, drink, and cooking. Last year, the Lindgrens announced a shift away from new titles, focusing instead on rare materials — they’ve built up quite an archive over the years, and antiquarian items can fetch a pretty price. “But often the most exciting and satisfying book is not that expensive,” Don says. “Rather, it’s something that just has a really great story.” North Dam Mill, 2 Main St., Biddeford. 207-602-6246.

Miles between Biddeford and Tokyo, home of the most distant client the Lindgrens regularly work with.

Community cookbooks, from all 50 states, by church groups, Junior Leagues, and school parents.

Approximate number of books and ephemera, including 3,200 depictions of pigs on old postcards, trade cards, and the like. “Every type of image of a pig you could imagine,” Don says.

Price tag on a first edition of Susannah Carter’s The Frugal House Wife: or, Complete Woman Cook, published in Dublin in the 1760s. It’s one of two known copies.

Age (in years) of Rabelais’s copy of the Deipnosophistae, a 16th-century run of an ancient Greek account of Roman banqueting. It’s the oldest book in the shop.