Carol and Eugene Bostock, of Northborough, Massachusetts, have enjoyed summers at Libby’s for almost 30 years. “It’s very peaceful,” Carol says, “away from the hubbub of daily life.”

Got an Airstream and a couple of dogs and a set of Adirondack chairs? Want to summer at the seashore, shoulder to shoulder with kindred campers? Come with us to Libby’s Oceanside in York Harbor.

From the August 2014 issue of Down East magazine

Bill “Mac” McNamara (with his two Yorkies, Velma and Daphne) has been coming to Libby’s with his wife Kathleen and their 1985 Airstream Excella since 2000.

Within a decade of its 1923 opening, “The Libby Camps had spread with such fungus-like rapidity that York Harbor was in danger of being almost completely swamped by young ladies in shorts, young men in soiled undershirts, and fat ladies in knickerbockers,” Kenneth Roberts wrote in his 1938 book Trending into Maine. Times and trends have changed, but Libby’s inclusiveness has not. It’s one of the few sites in America that allows dogs as well as camping rigs of all kinds — from Airstreams to sheep wagons to converted German ambulances — right on the ocean.

“Libby’s Camp provides the mower and you cut your own grass,” says New Hampshire camper Glen Guidi, who purchased his Puma trailer on site (and on sight) three years ago. “It’s not a lot to mow. You go around your trailer three or four times. The back takes a little longer because you want to keep it real nice.” For Guidi, a former hockey player with a replacement hip and chronic back trouble, it’s enough exercise “to work up a sweat and keep my weight down.” Evenings, he and his wife, Susan, walk their dog, Geno, on the beach. 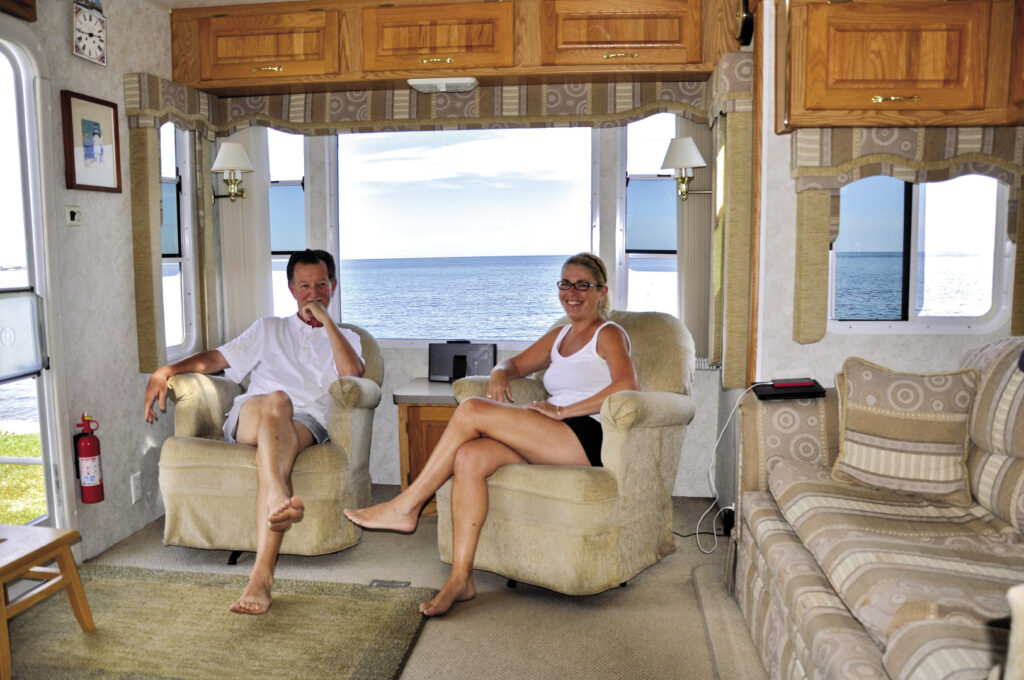 The Libby’s pace is leisurely (posted speed limit: 3 mph). “We have people who come and they put their chair out by the water, and that’s where they stay for two weeks,” says co-owner Candy Davidson. Others explore Long Sands Beach, visit Nubble Light (visible across the harbor on clear days), participate in the community dog walks and campfires — and a few, like Gary and Gayle Gosselin, even get a little work done. Gary is a Vermont real estate broker who specializes in the sale of hospitality properties, and few properties offer more hospitality than Libby’s.

“Some campers have developed an extended family here,” says Candy Davidson. “It’s very sad when everybody leaves. But they keep in touch with each other over the course of the winter. There’s a continuity — that seems to be important to a lot of people. As one lady told me, ‘Thank you for keeping this a campground and not turning it into a high-rise motel or a restaurant or something else. I hope everybody who comes here realizes what a gem this is and what a privilege it is to be able to camp by the ocean.’”

Love Libby’s? Check out our bonus gallery of even more photos!