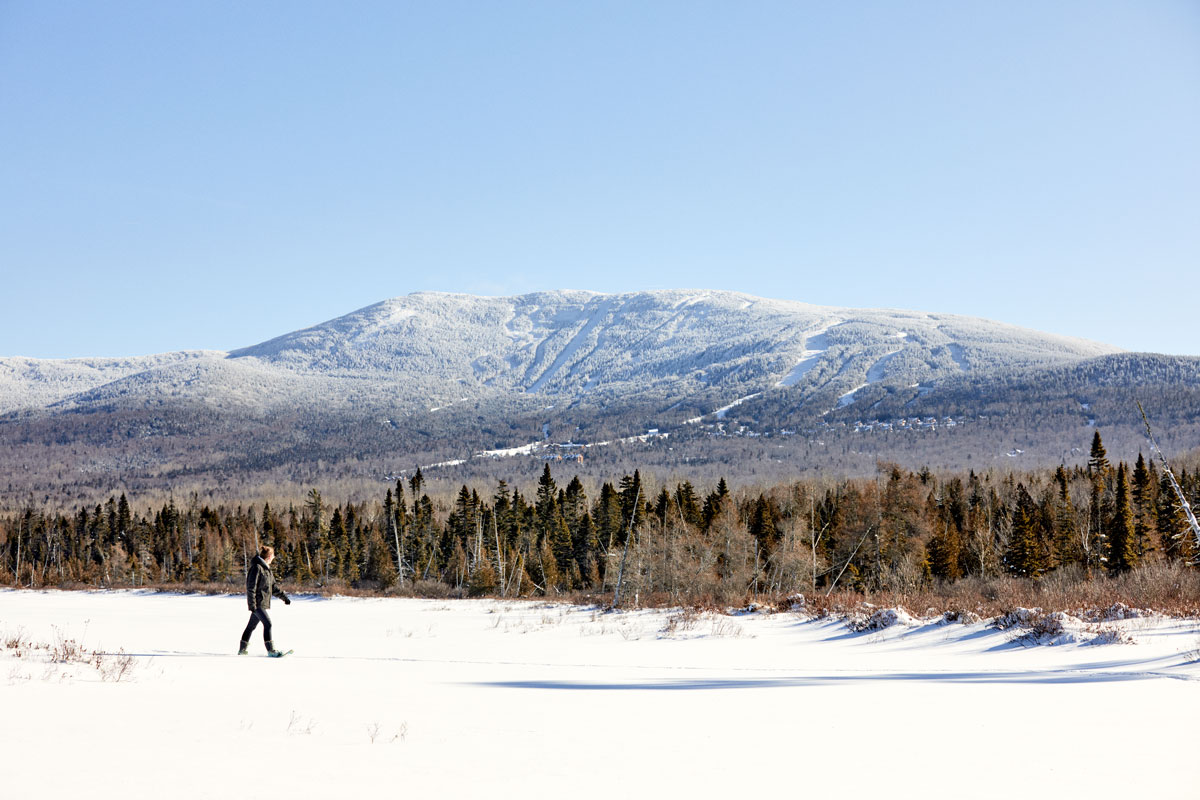 When the longtime owners of Saddleback Mountain pulled the plug on their Rangeley ski resort in 2015, citing the expense of capital improvements and nixing some 300 seasonal jobs, few Maine powderhounds thought the state’s third-largest ski area would still be closed five seasons later. As of late January, a Boston-based investment firm called Arctaris has closed a $6.5 million purchase of the mountain, with a plan to invest $38 million in the mountain and a goal of reopening next winter. The attitude around Rangeley is jubliant and hopeful, and prospects for a ’20–’21 Saddleback season seem strong. But after years of delays in financing and false starts from potential buyers, nothing about the return of Saddleback seems guaranteed until the chairlifts are running again.

Here’s the thing, though: Rangeley has plenty to woo the devoted outdoorsperson, with or without the hill that once attracted more than 100,000 skiers annually. And in Saddleback’s absence, the locals are doubling down on everything else that makes their home a winter mountain mecca.

Rangeley has been an outdoor-rec hub since at least the 1860s, when anglers got wise to the trophy brook trout hiding in its surrounding streams and abundant high-country lakes. It’s an Appalachian Trail town and a great base camp for snowmobiling, snowshoeing, and cross-country skiing in the western Maine backcountry. Some people bought their gear here. Bowl a few frames at Moose Alley on a Friday night and you’ll be surrounded by folks who value those resources, plenty of whom make their living in the hospitality industry, catering to like-minded visitors. Without Saddleback providing winter jobs, the town has seen some émigrés, and its workforce has dwindled (you may hear lifties at other Maine hills joke ruefully about being “Rangeley refugees”). The fact that this hasn’t stopped a handful of entrepreneurs from investing in their community is a testament to Rangeley’s resilience.

Andrew “AJ” Ash opened AJ’s Fat Bikes in 2015, and he and his staff spent the last few years working to make Rangeley a destination for fat-tire winter cyclists. In partnership with the Rangeley Lakes Heritage Trust, they’ve started grooming new winter trails for fat biking (as well as snowshoeing and cross-country skiing), helped build a bike park downtown, and volunteered time and equipment to lead free clinics introducing kids to the sport. The Rangeley Lakes Trails Center, already a place of pilgrimage for Nordic skiers, started welcoming fat-bikers in 2016 and now draws riders from across the state for its annual loppet (or long-distance race). The fat-biking push is part of a broader effort among municipal, business, and nonprofit leaders to develop “new immersive experiences” that take advantage of the area’s natural resources. The campaign, launched on the heels of an economic development workshop designed by the Maine Office of Tourism and the Northern Forest Center, includes grant-supported community health programs to get kids outside and investments in signage, maps, and literature to help both locals and visitors navigate outdoor offerings.

Last year, Rangeley welcomed not one but two stylish new gathering places. Furbish Brew House & Eats, a brewery in a former B&B on Main Street, opened just months after Rangeley adopted a downtown revitalization plan that emphasizes filling empty storefronts, throwing more festivals, and prioritizing foot traffic over vehicle traffic. In the quieter village of Oquossoc, a few miles west of Rangeley proper, on the far side of Rangeley Lake, Paul and Laura Reynolds opened the rustic-mod Portage Tap House. Though the workforce shortage and reduced winter visitation is a hurdle, Paul says, “We decided to do something to give the town a shot in the arm.” Just the kind of get-up-and-go attitude you’d expect from Maine’s hardiest adventure town.

This article has been updated from the print version to reflect the completed sale of Saddleback Mountain.

Moose Alley
Ten bowling lanes, a few pool tables and skee-ball machines, and a bar with an indoor fire pit (hey, long winters). The live music is the real draw, though, with bands every weekend including plenty of Portland acts (a lot of rock, roots, and blues — think the Mallett Brothers or Chris Ross). Also the gonzo headquarters of January’s Snodeo snowmobile fest, with sledders doing flips off a giant ramp out back. 2809 Main St. 207-864-9955.

Rangeley Lakes Trails Center
At the base of Saddleback Mountain, more than 30 miles of groomed trails, varied enough to attract Nordic skiers, snowshoers, and fat-bikers of all skill levels (and hikers and bikers in the summer). Rentals and lessons for newbies and visitors; locals buy memberships for season-long access. 524 Saddleback Mountain Rd. 207-864-4309.

Furbish Brew House & Eats
Great wood-fired brick-oven pizzas (and creative — try the one topped with blueberry-glazed pork) in a stately, repurposed 1912 home. The front patio is where it’s at in the summer, with tables looking over Town Cove Park and glittery Rangeley Lake. 2541 Main St. 207-864-5847.

Portage Tap House
Across the lake from Furbish, another sleek-feeling pub, this one decorated with old canoes and historic signage celebrating Rangeley’s fishing, boating, and guiding history. After a long day on the trails, tuck into the bison meatloaf. 74 Carry Rd. 207-864-9404.

See the rest of this year’s Best Places to Live in Maine!