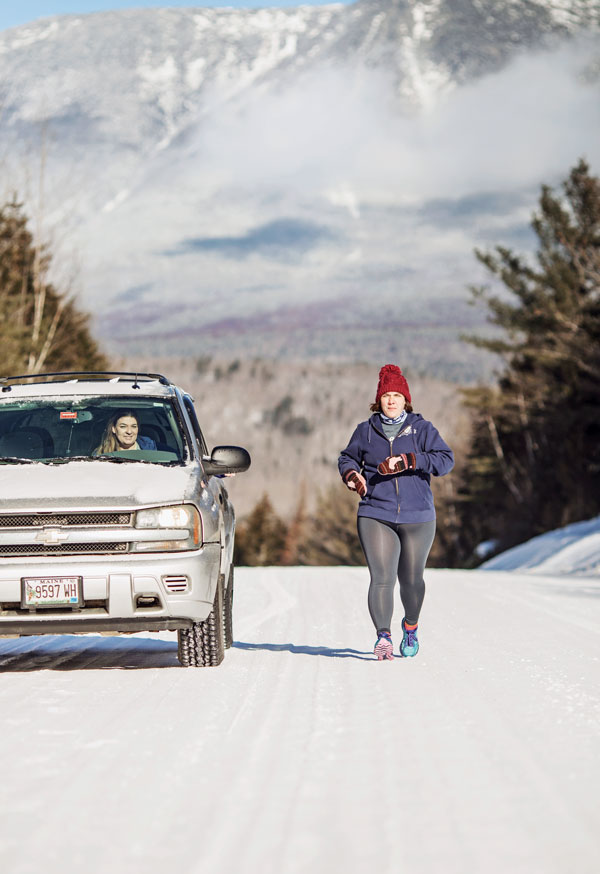 A spontaneous act of grit meets a random act of kindness at the Millinocket Marathon.

[dropcap letter=”J”]oelle Ingalls was nearing the end of her second Millinocket Half Marathon this winter when she decided to text her husband back in Surry.

“Say what?” he wrote back, understandably confused, since his wife had registered only for the half, which he correctly thought to be 13.1 miles. She’d changed her mind, Ingalls wrote. She was going to attempt the full marathon. Her first ever. On next to no training. In December. In the snow.

Ingalls didn’t die. The 39-year-old paralegal — who ran while carrying stones from The Summit Project, engraved with the initials of fallen Maine soldiers — finished 26.2 miles in a little over eight hours, crossing the finish line well after dark, the last runner to do so (two women who’d walked the course finished behind her). But the final miles were rough. After mile 19, no spectators remained along the course, which at that point was well outside of town, following the forest road that leads to Baxter State Park.

“It was so quiet,” Ingalls remembers. “There are no streetlights. The snow was falling. It was a little eerie. You could hear the cracking in the woods, and you’re very quickly reminded that there is absolutely nobody.”

Until, suddenly, there was somebody.

Ashleigh Blake, 28, had the day off from her job as a dental assistant, and like a lot of Millinockians, she came out to cheer and to stand around the fire at the start/finish line, shooting the breeze with neighbors and runners who’d come from all across the country to run the free (and free-spirited) marathon, now in its third year. Sometime after dark, she got to thinking that there wasn’t a sweep bus, as at many marathons, to “sweep up” runners whose pace was too slow. So she figured she’d check on the stragglers. First, she stopped at Dunkin’ for a few hot cocoas. Then she set her phone on her dashboard and recorded a video of the snow coming down heavy on the darkened road outside town.

“Everybody needs a little bit of cheering and inspiration,” she says on the video, which she posted to Facebook. “I think it shows amazing spirit and character for these ladies who choose to push on.”

What Ingalls remembers is an angel, more or less, in a Chevy TrailBlazer, who showed up with cocoa just as her enthusiasm was starting to flag. “I was starving, and I was frozen, and I was so grateful,” she says. In the final, hardest miles of the race, Blake came around twice more, unobtrusively, offering words of encouragement and, on her last visit, a ride from the looming finish line, since the shuttle buses had long since stopped running. At the finish, though, Ingalls — shivering with cold and exhaustion — hopped right into a car with friends who were waiting. Only later did she realize she hadn’t gotten to thank the woman who’d watched over her those last few miles. “I owe her my sanity and probably my finish,” she wrote in a Facebook post the next day, looking for anyone who might know “the woman in the white SUV.”

Facebook delivered, and in January, Ingalls returned to Millinocket to meet and thank Blake.
“I don’t think she understands how critical her support was,” Ingalls says. “She downplays it and says anyone would have done this, but it’s not true.”

“It’s just the way I was brought up, along with just about everyone I know,” Blake says. “I’d love to say that it’s a Millinocket thing, but I think it’s just kind of in Mainers’ blood to go above and beyond for people.”