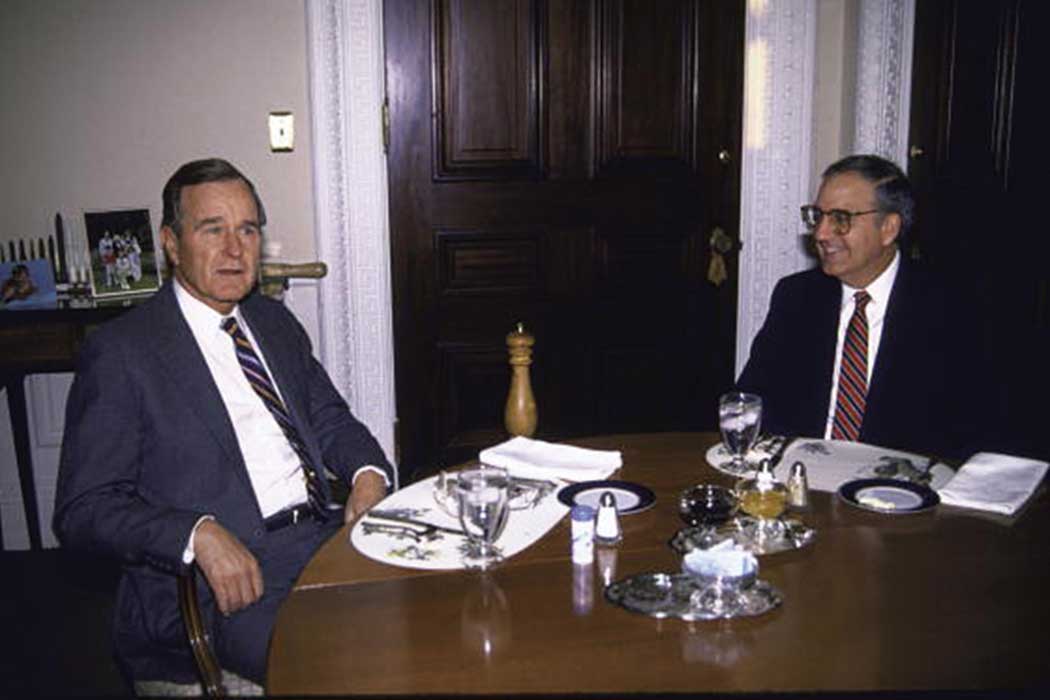 President Bush and Democratic Senator George J. Mitchell had Maine in common — along with a willingness to make principled compromises.

[dropcap letter=”I”]n early December, I attended President George H.W. Bush’s memorial service at the National Cathedral, in Washington, DC. The many mentions of Maine during the service reminded me of how our common love for our state was an important factor in the relationship between the President and me.

I was born and raised in Waterville and attended public schools there; I graduated from Bowdoin College, lived and worked in Portland for much of my adult life, and now have a home on Mount Desert Island. President Bush was born and raised in Connecticut and lived and worked much of his adult life in Texas. But his family home in Kennebunkport was where he spent most of his summers and occasional holidays. We talked about our love for Maine and our feelings, impressions, and experiences of Maine and its people.

The service was also a moving reminder of how different the politics of today are from those practiced during Bush’s presidency. Politics in America have always been rough and tumble. There has never been a golden era free of harsh rhetoric — or even occasional violence. In a memorable Bangor Daily News op-ed in 2012, UMaine professor Amy Fried described the vicious insults hurled between candidates in the 1800 presidential campaign, John Adams and Thomas Jefferson, both of whom are now revered as Founding Fathers. At best, Professor Fried concluded, “there have been periods of profound discord and others when cooperation held.”

We can safely conclude we are now in an era of profound discord, but during President Bush’s tenure, some cooperation held. I had the privilege of serving as Senate majority leader during the four years of his presidency. The president and I had many differences and disagreements; there were tough, contentious negotiations. But even those differences were expressed in terms less harsh, less personal than is the case today.

We worked together in a truly bipartisan way.

During President Bush’s first two years in office, we worked together in a truly bipartisan way to enact laws that benefitted the people of Maine and the nation. Three major legislative actions come to mind. The first was the Americans with Disabilities Act, which, for the first time in our nation’s history, made it possible for people with disabilities to lead lives of independence and opportunity. The bill’s principal authors were Bob Dole, a Republican, and Tom Harkin, a Democrat; it passed unopposed in the House, and with only eight “no” votes in the Senate.

At about the same time, we dealt with the all-important federal budget. In August 1988, at the Republican National Convention, Bush had accepted his party’s nomination, famously promising, “The Congress will push me to raise taxes, and I’ll say no. . . . And they’ll push again, and I’ll say to them, ‘Read my lips: no new taxes.’” It was a powerful statement and well received by his supporters.

So when the president and the new Congress took office in January, the lines were clearly drawn and the differences familiar to most Americans: President Bush was opposed to any new taxes; my party believed a deficit reduction package should include both spending cuts and tax increases. There followed nearly a year of difficult negotiations. But while we disagreed strongly, no one spoke or acted dishonorably. We shared an objective: to reduce the deficit. Our disagreement was on how to get there, and we all knew we had to compromise.

In the end, we reached agreement on a balanced package. When it was ready, the president delivered a nationally televised speech in its favor. In what was billed as the televised “rebuttal,” I supported the president and the package. Bush was heavily criticized for agreeing to any tax increase. We were criticized for agreeing to any cuts in programs. The package was defeated in the House, but we went back to the bargaining table in good faith and returned with a revised package, still balanced, this time sufficient to gain a majority in both houses.

It was on the third issue, which directly affected Maine, that President Bush and I worked closest and most successfully together. Not long after entering the Senate, I stressed in a speech the gravity of the environmental and economic problem posed by acid rain, noting that Maine lakes had seen an eightfold increase in acidity in the 40 years prior. For the next eight years, I was among a small bipartisan group of senators who worked to bring the issue to the public’s attention and move legislation forward.

Among the many obstacles was President Reagan, who wanted to terminate the Clean Air and Clean Water acts, not improve them. Democratic Senator Robert Byrd was the Senate majority leader then, and while he didn’t share Reagan’s broad hostility to regulation, he was protective of West Virginia’s interests, particularly the jobs of coal miners, to which clean air legislation was seen as a threat. Proponents of legislation, like me, sought to reduce the amount of sulfur emitted from Midwestern power plants, many of which burned high-sulfur coal from West Virginia. Throughout the 1980s, evidence had accumulated that emissions from those plants were being deposited in the lakes and streams of the northeastern states and the provinces of eastern Canada. Canadian Prime Minister Brian Mulroney was a friend of Bush’s and urged the then–vice president to support legislative action on acid rain, but still the possibility remained remote.

President Bush enjoyed a warm relationship with Bill Clinton, his Democratic successor, who visited him in Kennbunkport on several occasions. The outgoing Bush’s letter of support to Clinton has been widely praised as a model of leadership transcending partisanship. This photo and below courtesy of the George Bush Presidential Library and Museum. 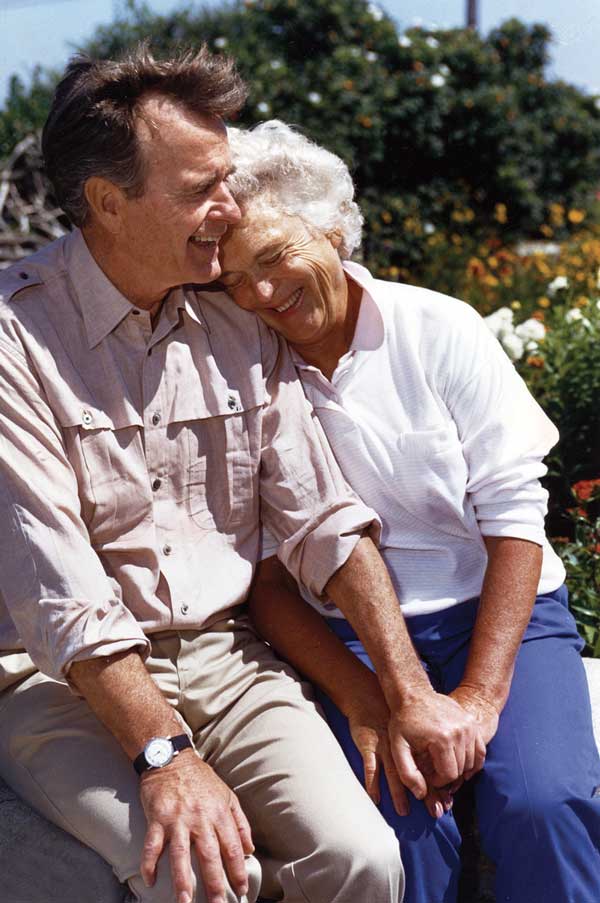 Then came the election of 1988. Campaigning for majority leader, I made it clear to my Democratic colleagues that, if elected, I intended to vigorously pursue clean air legislation. But of much greater significance was support from newly elected President Bush. Within a month of his inauguration, in a break with Reagan’s policies, Bush announced that he would propose legislation for a new and more effective Clean Air Act, including action on acid rain. Thanks to his courageous decision, the question suddenly, dramatically shifted from “Will there be a clean air bill?” to “What will be in it?”

President Bush outlined his clean air proposals that June and followed up a month later with draft legislation. It took six months of intense, divisive negotiations to get a draft bill through the Senate committee, of which I was a member, but we were able to do it, and the House and Senate overwhelmingly approved compromise legislation that fall. Twenty years later, the Natural Resources Defense Council concluded, “The Clean Air Act is a genuine American success story and one of the most effective tools in US history for protecting public health.” Among many other benefits, the NRDC estimated that the amendments passed in 1990 have saved some 2 million lives.

I am often asked if I think a return to bipartisanship is possible. I believe it is, but it will take leadership willing to listen to contrary points of view and members of both parties willing to enter into principled compromise. In our large and diverse country, that’s not only desirable but also necessary if we are to deal with the problems of our time — as President George H.W. Bush did in his.

More on the Bushes in Maine

The Bushes at Kennebunkport