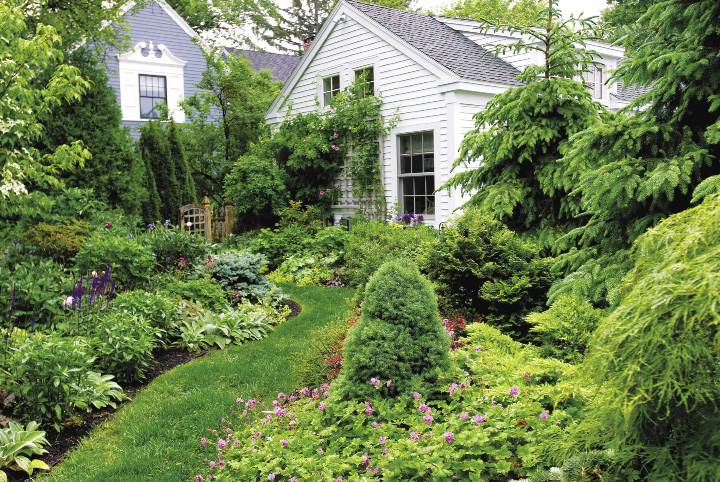 Waterfalls, ponds, and a playful collection of statues turn a Cumberland backyard into an enchanting hidden retreat.

Connecticut retiree Flip Meyer was starting a new life when she bought a 1740 former parsonage on a third of an acre in Cumberland Foreside. Behind the Cape Cod–style house, which had hosted a long procession of church families, was an abandoned garden in need of a fresh start of its own. It was just a bare outline of a bed bordered by grass and shrubs.

“I got the sense that many of the people who had lived in this house with their families loved to garden,” says Meyer, whose inkling was later confirmed by a centenarian neighbor.

With few traces of the original design remaining to guide her, Meyer set about transforming her backyard into a relaxing retreat, beginning with a shady hosta garden sprinkled with fleecy goat’s beard and backed by evergreens. Meyer hired New England Landscapes, of Scarborough, to dig a pond and build a stone patio, a space she enjoyed so much that she later moved and enlarged it, adding twin waterfalls, tall grasses, lily pads, and stone walls. Roses climb the white clapboards, and mounds of peonies bloom just outside Meyer’s bedroom, which is outfitted with French doors. “I have always loved having water,” Meyer says. “From my bedroom, I can see the pond. I can hear the waterfall, and that is what I look at when I open my eyes in the morning.”

Meyer has dogs, which, she says, “are not good for lawns,” so she asked landscape designer James McCain, who now oversees The Arboretum at Fort Williams Park, in nearby Cape Elizabeth, to excavate most of the grass, leaving just a narrow green path that meanders around an island flowerbed. The effect is that of a fairytale courtyard, completely hidden from the road, thanks to a row of dense spruce trees.

Fanciful stone statues add to the enchantment. “I love statuary in the garden,” says Meyer. “It’s not a garden to throw Frisbees around. It is for entertaining friends. It is a very restful, serene place. I just love looking at the beauty of it.”

The mermaid who lounges in the branches of a spruce by the edge of the pond and the sturdy ram that nibbles pink cranesbill geraniums were acquired at Fiachre, a Portland gardening shop. The concrete warrior crouching under a Japanese maple is one of several half-size replicas of famous terracotta funerary sculptures built for the first emperor of China. Meyer bought them at a museum gift shop in China and planned to display them indoors, but soon found they posed an unusual problem. “They smell so badly,” she says. “So I would bring them in and out of the garden. It took years to get rid of the smell.”

Seventeen years since she began reclaiming that whisper of flowerbed, Meyer’s garden is lush and mature, but it is not invincible. Last year’s tough winter took out a butterfly bush and several evergreens. The roses also took a hit. Rather than seeing these losses as a setback, Meyer sees them as an opportunity to once again begin anew. “Otherwise,” she says, “it would be so boring.”