An April Shower of Seeds 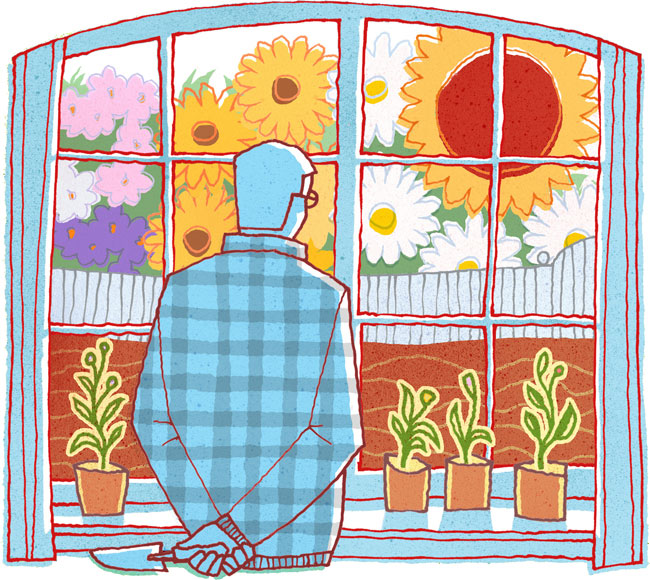 It’s still a fine time of year to sow your dream garden.

[T]here’s a rule about timing in Maine. You hear it in various forms, but I’ll give you the textbook version: To the question When should I do X in Maine?, the answer is always Two months ago.

Actually, I’m not sure this is a real rule, but it ought to be. God knows I hear it enough. There’s something about the way the seasons roll along here: time can seem to stop, days piling on days like the leaves you should have raked before the snow started (see what I’m talking about?), until suddenly the world has changed around you. When did it happen? How did it happen? The winter that was never going to end is barely a memory. The sun is hot, and the mud just swallowed your shoe, and you never got around to ordering seeds for the garden this year, did you? Let alone rounding up trays and buying seed-starter mix and getting them going on the windowsill. Now it’s April, and April is about two months too late.

As an indolent Maine gardener, I’ve adopted my own rule: the best time for doing things is whenever they happen to pop into your head. Early spring is a great time for popping, though not much else. The soil around your house is probably waterlogged; if you go digging around out there, you’re likely to compact it, which is bad for the roots. Pruning is doable, if you’re careful where you step. But seeds — now there’s something to think about.

I’ll grant you that April isn’t the best time to start planning your herb garden or your vegetable patch if you’re hoping to grow your thyme or heirloom tomatoes from scratch. You’ll want to have well-established young plants ready to set out as soon as the danger of frost is past, which ought to be pretty soon now. But the realm of gardening is vast, and there’s an enormous range of plants that are both beautiful and easy to grow from seed — and April is a fine time, maybe even a perfect time, to get to know them.

Let’s consider four general categories of garden seeds that will do just fine, and might even benefit, from a late-spring sowing:

Flowers and herbs you can sow directly into the ground.

Some of our favorite flowers fall into this category: lupines, whose tender roots don’t take to transplanting; foxgloves, whose thousands of tiny seeds are hard to handle, but spring up readily where they’re happy; Nicotiana sylvestris, a stately, fragrant annual; Adenophera or lady bells, an elegant colonizer often found in old gardens; and Hesperis matronalis or dame’s rocket. Calendula, or pot marigold, often grown for medicinal purposes, can be scattered right on the ground and even on unmelted snow. But my greatest personal success has been with wildflower mixes, which I sprinkled all around our newly built cottage several Aprils ago. A typical mix contains 20 or so varieties, of which only a few will likely make much of a show — but what a transformation, from waste ground to a scrappy, colorful wild garden.

Perennials and biennials that can be sown late and will bloom the following year.

My earliest garden dreams were fired by those perfect English gardens I’d glimpsed in coffee-table books and on Masterpiece Theatre. I turned to seeds mostly out of economic necessity: those elegant drifts of helianthus, backed by delphiniums and other blooms, would cost more than my car if I bought them as full-grown plants. And as it turns out, many perennials do grow readily from seed, with the caveat that they won’t come into flower until their second year in your garden. So there’s no need to hurry. Start the seeds now, plant them out in early summer. Excellent candidates include echinacea, rudbeckia, liatris, shasta daisies, coreopsis, gaillardia, hollyhocks, and Japanese iris — the last is a bit of a surprise, but they sprout like magic and grow like weeds. There’s a lot of room for experimentation and discovery here.

Uncommon plants you can only get from seed.

You don’t have to be a snob to enjoy growing plants nobody else has. Nor is there anything sinful about falling in love with some ravishing specimen in a catalog that you’ll never see at the local garden center. I’ve had particular luck with a few genuses — Campanula, Geranium (the perennial kind, not the popular tender plants that are actually Pelargonium), Viola, and Dianthus (which includes carnations and “pinks”) — that are wonderfully diverse and rewarding to grow, but are represented in the plant trade by only a handful of varieties. Others, including wild natives like Silphium and Eupatorium, will grow (often to daunting stature) for anybody who cares to sow them. There’s even an ornamental rhubarb, Rheum palmatum, that will trigger a pleasing double take by your garden visitors. File this under guilty pleasures, I guess.

Plants that are so fun and easy to start from seed that you might as well just grow them.

The quickest way to get your head around this is to glance at those charming little “My Own Garden!” packages that are marketed for kids. Typically they contain things like sunflowers, nasturtiums, sweet peas, marigolds — large, easy-to-handle seeds, guaranteed to sprout, fast growing and early flowering. You don’t have to be a kid to enjoy this kind of thing, and the variety of black-eyed Susans (to offer just one example) that you can grow from seed is greater than you’d imagine.

I’ll wrap up my case for an April seed adventure with one last thought. Gardening in Maine is an iffy thing. Our climate runs to extremes, our soil is often poor and hard to work with, our growing season is short, and many of us are here for only part of it. It goes without saying that many of our bold garden projects don’t pan out. So it is with growing plants from seed. But with seeds, the cost of failure is low, and however things turn out, there’s an element of participation and excitement that you don’t get from buying a full-grown plant and plunking it into the ground. When we succeed — which we do, at least as often as not — the reward feels out of proportion to the modest effort involved. It’s cool, it’s worth doing, and you can start right now.

You will need: a tray, seed-starting mix, a spray bottle, and a small pair of scissors.

I like the kind of tray that comes as a kit, with a clear lid and molded containers for the plants — but not one that already contains starter mix, which is usually of poor quality. A good mix should be finely milled and not composed only of peat moss. Read the directions: some mixes need to have water added while in the bag.

Pour the mix loosely into the planting compartments, then moisten if needed (pour water into the tray base, wait until it’s absorbed, then drain off the excess). Place seeds gently on top of the mix — don’t bury them — then sprinkle enough mix to cover them to the recommended depth. If no depth is given, cover just enough to hide them from direct sun. Don’t pack them down.

The principle here is that seeds germinate quickest, and are least prone to rot, when they’re kept moist, but not wet, with plenty of air around them.

Cover with the clear lid (or plastic wrap, but keep it out of contact with the mix). The cover shouldn’t be airtight.

If the mix starts to look or feel dry, moisten it with the spray bottle. When seedlings emerge, remove the cover. Thin, as needed, with scissors. When permanent leaves appear (after the 1 or 2 “baby” leaves), move to a cool, bright window. “Cool” can be as low as 50°-ish, especially at night; “bright” means as much sun as the baby plant will tolerate — ease the transition and mind how it’s getting on. Artificial light can work, but again it should be cool (fluorescent or LED) and bright (less than 1 foot above the plant).

As always, keep the mix moist but not sopping: water from below, then drain.

If the mix does not contain nutrients, feed lightly with an organic fertilizer (e.g., fish emulsion, seaweed extract). Rule of thumb: read instructions, cut dose in half. If the plants look leggy or tender, they need more light and/or lower temperature.