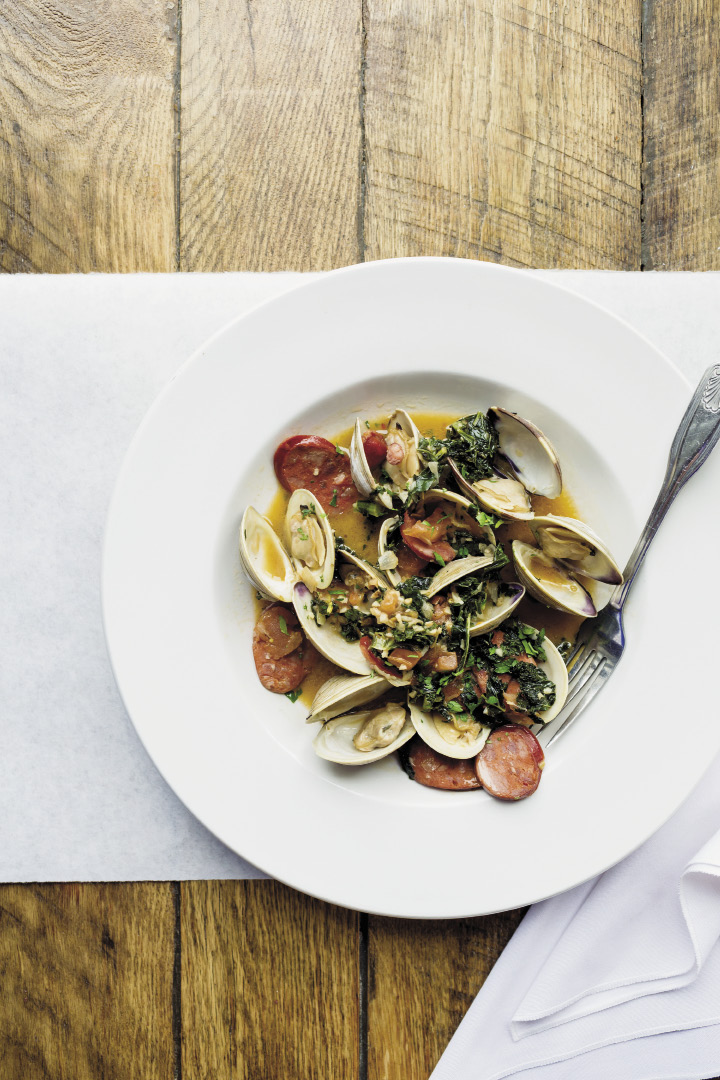 Chef Michele Ragussis never planned on spending her summers cooking on Rockland Harbor. Just a few years ago, she was a burgeoning Food Network celebrity, fresh off stints on competitive cooking shows Chopped, 24 Hour Restaurant Battle, and Food Network Star. But in 2012, she received a fateful call from a former employer in need of a chef for The Pearl, a revamped waterfront dining spot. Ragussis, a New England native, had just moved to Brooklyn, but she traveled to Rockland to see the restaurant anyway — and with one look out the window, she was sold. “I walk in right through the doors, and I look at that,” she says, gesturing at the view of the harbor from the dining room, “and I’m like, ‘Done.’ I had no decision to make.”

The building stands on pilings at the end of a long pier right by Rockland’s public landing. In the 1950s, it was known as The Woodshed restaurant. Later, it became The Black Pearl, a popular haunt that eventually closed its doors in 1996. In 2001, new owners opened Grapes Restaurant in the space, but the building was severely damaged by an arsonist on Christmas Eve 2004. In 2010, restaurateur Jimmy Fanning purchased and rebuilt the restaurant, opening it under its current name and bringing Ragussis on board. This summer marks Ragussis’ third at the restaurant, and she’s bringing out some new features — including a bar menu and Sunday brunch with live music — before closing for the season in early October. “We’re only here for four months,” Ragussis says. “We want everyone to have fun and feed them really great food.”

Down the pier, through the doors, and past the bar, there’s that view that first lured Ragussis to Rockland back in 2012. The dining room is lined with windows, most of them open to welcome a breeze from the harbor. A wraparound porch offers outdoor seating. Inside, there’s a cool color scheme with New England touches: gray wainscoting, support columns wrapped in sailing rope, and ample swaths of knotty pine. The tables are set with mismatched, weathered chairs — like a sampling you might see at a Saturday morning yard sale. Place settings are similarly rustic, with torn paper for placemats, bits of twine instead of napkin rings, and recycled tequila bottles standing in for flower vases. As guests arrive and the tables fill up, the sounds of lapping waves and creaking boats are replaced with the hum of happy chatter.

There isn’t much turf to accompany the surf on this menu, so those not enamored of seafood may want to look elsewhere. But if you’re craving coastal cuisine, you couldn’t be in better hands: Ragussis has seafood in her blood. “My dad was a fisherman, and every Sunday morning he would wake me up and say, ‘Let’s go,’” she recalls. “And he would carry me out on his shoulders and we would go striper fishing. I loved it.” Ragussis still fishes today, in fact, taking breaks from cooking to shove off from Rockland Harbor and catch what’s fresh. Her reverent treatment of seafood is apparent in each section of the menu, which is broken into five categories: Ice (featuring a local raw bar), Fire (cooked starters like crab cakes and fire-roasted shrimp), Ocean Favorites (think big bowls of mussels and steamers), Soups and Salads, and Maine Courses. Equally evident are her ethnic culinary influences — Ragussis is from a Greek-Italian family and grew up in the Portuguese community of Bristol, Rhode Island.

Start with one of the Pearl’s unfussy classics, like light-as-air potato chips made in house with local spuds, lobster artichoke dip blended with mascarpone and Parmesan, or Ragussis’ strictly traditional clam chowder (she spent five years refining the recipe). For an adventurous appetizer, try oysters with a strawberry or jalapeño mignonette, or the asparagus lobster salad: asparagus stalks dressed in lemon and topped with chunks of chilled lobster meat, grated Parmesan, and a deep-fried poached egg. (Don’t bother wondering how it’s possible to bread and fry a poached egg without breaking its delicate yolk — leave that to the experts and just dig in.)

The menu is printed daily to ensure that entrées make use of the freshest ingredients available, but you can almost always count on some popular standbys like seafood-studded cioppino (a wine and tomato broth stew loaded with lobster, clams, mussels, fish, scallops, and shrimp) and linguine with clams. Lobster fra diavolo comes wreathed in a ring of steamed mussels, its spicy tomato sauce balanced by a small scoop of cool, basil-infused ricotta. This summer’s runaway sellout, Ragussis says, are the scallops, served with sweet creamed corn and salty, crispy prosciutto.

A short dessert list includes standard offerings like a chocolate rum torte and blueberry cobbler a la mode (garnished with a dainty mint leaf that belies the enormous scoop of Gifford’s vanilla sitting beneath it).

Each course is a love letter to the ingredients and flavors of the Northeast — and that’s exactly the way Ragussis planned it. “I just love New England,” she says. “Being in New England is soothing to my soul.”

Spend an evening at The Pearl — the sea breeze blowing in, the harbor lights sparkling on the water, a plate of fresh Maine seafood on the table — and you’ll know exactly what she means.