Brewers are tapping into a Maine woods tradition.

Marsh Island head brewer Clay Randall harvested spruce tips to use in Green Growth, a beer that would have made Thoreau dream of the wind soughing among pines.

By Will Grunewald
Photographs by Kevin Bennett

On a warm Saturday afternoon this spring, a small crowd gathered at the edge of a parking lot in the University of Maine’s Demeritt Forest, in Orono. They swatted mosquitos, grabbed beers from a big blue cooler, and tramped off through knee-high grass to a grove of red and Norway spruces. Then, everyone started snapping off the trees’ light-green new-growth tips, dropping sprig upon sprig into buckets and sacks.

Young spruce needles are rubbery soft, the stems twist without snapping, and if you rub a spruce tip between your palms, you get a bright, almost candied scent. Use several dozen pounds of spruce tips in brewing, and you get a beer that captures those same piney notes — the promise of beer is what brought out the volunteer harvesters in Orono. 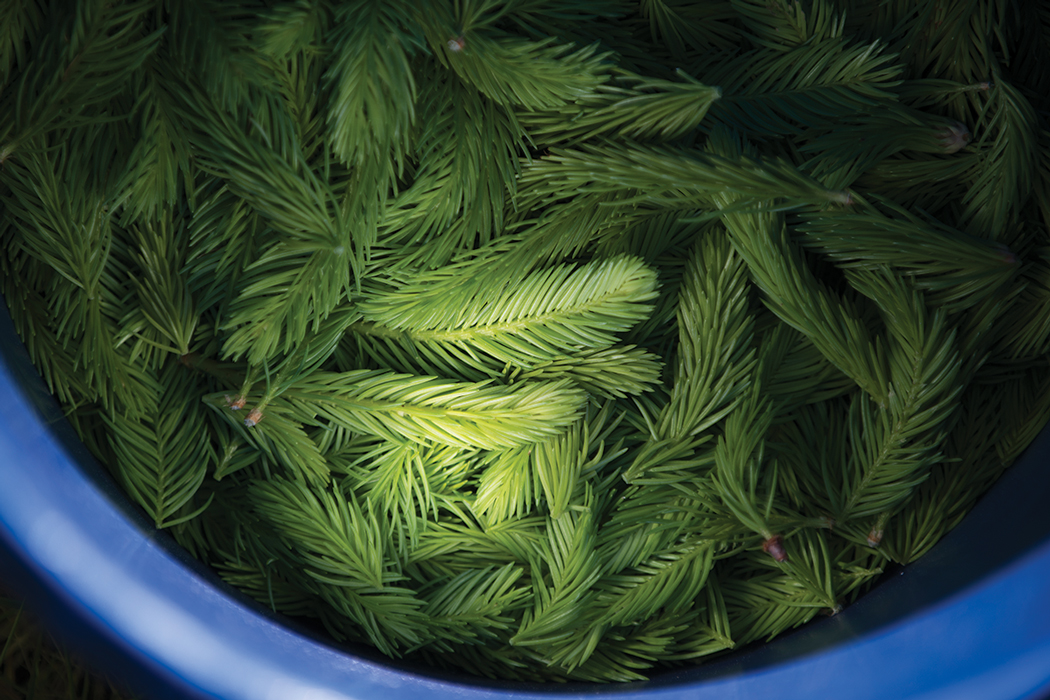 A few years back, UMaine School of Forest Resources profs Dan Hayes and Aaron Weiskittel started kicking around an idea to team up with a local brewer to create a spruce beer, and this year was their second working with Marsh Island Brewing. Among their fellow pickers: Catherine Chan, a grad student who uses hyperspectral imaging to study plant health; Jeremy Pontes, a local beer fan who’d otherwise have been mowing his lawn; and Rick England, Marsh Island’s brewery manager.

Spruce harvesting traces to precolonial times, when Native Americans made evergreen teas to ward off scurvy in winter, when fruits and vegetables were scarce (the needles contain vitamin C, it turns out). Explorers and settlers copied, and resinous quaffs, alcoholic and not, were soon common on the high seas and in the backwoods. Any number of evergreens would do the trick, but in Maine, spruce was abundant. And although mature branches give an unpleasantly woody taste, today’s brewers can be choosier than their forebears, what with scurvy in the rearview, and wait for the tastier spring growth.

Still, not everyone loves drinking eau de tree. “It’s a polarizing style of beer,” Marsh Island head brewer Clay Randall admitted, taking a break from picking. Initially, he was wary to attempt a spruce beer, but he’s glad he did. “The first time we added the tips, the brewery smelled like a Yankee Candle shop had exploded,” he recalled. “I thought, ‘Yep, that’s gonna work.’”

At a homestead near Millinocket, Henry David Thoreau came across spruce beer, then rhapsodized about its bracing wondrousness.

Instead of water we got here a draught of beer, which, it was allowed, would be better; clear and thin, but strong and stringent as the cedar sap. It was as if we sucked at the very teats of Nature’s pine-clad bosom in these parts — the sap of all Millinocket botany commingled — the topmost most fantastic and spiciest sprays of the primitive wood, and whatever invigorating and stringent gum or essence it afforded, steeped and dissolved in it — a lumberer’s drink, which would acclimate and naturalize a man at once — which would make him see green, and, if he slept, dream that he heard the wind sough among the pines.The Maine Woods, 1856