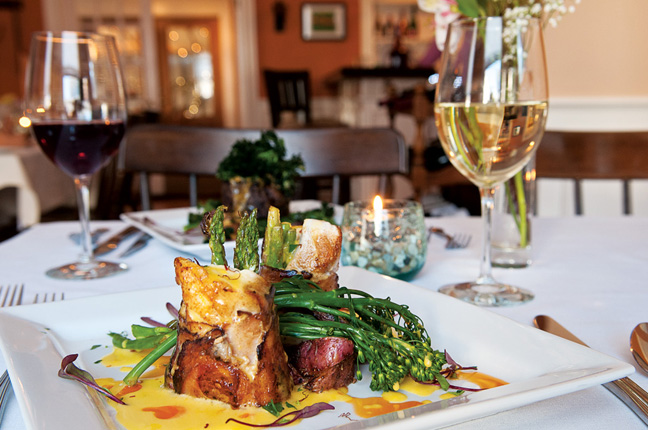 Like many Maine chefs, Josh Heikkinen seeks to elevate classic Maine fare to world-class cuisine. Where Heikkinen, chef-partner at Fathom in Bar Harbor, differs is that he’s not content to simply prepare native ingredients in inspiring ways. No, Heikkinen wants to raise Maine comfort foods, such as the lowly red hot dog, to culinary fame. “The red hot dog is Maine’s attempt at charcuterie. You only find it here,” he says. “I want to get it out of the convenience store and help it find its place in the culinary world.”

Heikkinen began working in restaurants while in college, starting as a dishwasher and working his way up in restaurant and catering kitchens, including August Moon in Bangor and Red Sky and Fiddler’s Green, both on Mount Desert Island. He was contemplating going out on his own when Tracey Hallett, another Maine restaurant veteran, began exploring the idea of opening a restaurant and sought his advice. A partnership was born. It was cemented when the location that held Maggie’s, a fixture in Bar Harbor for twenty-five years, became available. “The opportunities to move into a space that already had a great reputation as a successful fine dining restaurant are few and far between. It was the perfect place at the perfect time,” he says. Fathom opened its doors in the summer of 2011.

The restaurant occupies a bright blue frame house on Summer Street, just steps off the main drag of Cottage Street. The décor is subdued, with neutral colored walls and white tablecloths. Rooms are small, but there’s also an outdoor patio, shielded from the road. It’s fine dining, resort style: welcoming and comfortable, casual but with a hint of decorum. The pizazz is on the plate.

While Maggie’s was renowned for its lobster crepes, Heikkinen is courting a following for his lobster and red “snappah” egg rolls, filled with lobster blended with grilled and ground red hot dogs, braised leeks, and cabbage. “It sounds so weird, but it’s so delicious,” he says. “That savory porky greasiness boosts the lobster’s flavor. They were made for each other.” Still, he acknowledges that it’s hard for restaurant guests to accept that they can be in a fine dining restaurant and order a red hot dog.

Those who can’t wrap their tongues around the blend of lobster and frankfurters will find plenty to savor at Fathom. The first hint of updated Maine fare comes with the bread, a delicious swirl of anadama and focaccia paired with maple-molasses butter. “I wanted to go with pure anadama, a New England comfort food, but it’s too dense to start a meal with, so I decided to swirl it into focaccia,” Heikkinen says, adding that the maple and molasses play to the flavors in the anadama.

Zucchini gnocchi sautéed with lobster meat and tomato in a butter parsley sauce is a signature dish. “Everyone coming to Bar Harbor wants lobster, and the challenge was to give it to them in a way they’d never had it before,” Heikkinen says. When fall comes, the dish morphs into sweet potato gnocchi with butternut squash, a sublime flavor combination.

Local favorites include a grilled salmon with Maine chimichurri sauce, dilly beans, and dandelion greens accompanied by a golden glow pickle salad, and a Chateaubriand-style eight-ounce filet paired with a wild mushroom Béarnaise sauce and crispy kale. The flash-fried kale has become so popular, regulars order it as a side dish.

Like the breads, Heikkinen makes the desserts, which might include maple anadama bread pudding topped with Mount Desert Island Ice Cream’s vanilla bean — it’s so good, you won’t want to share.

Heikkinen says his repertoire was based in European-style last summer. Now he’s kicking it up a bit with Central American and Southeast Asian flavors. “I’m toying with a lamb korma burrito,” he says, then pauses a moment to mull it over. “I don’t know if I could do a burrito in fine dining, but stranger things have happened, like lobster and red hot dogs.”