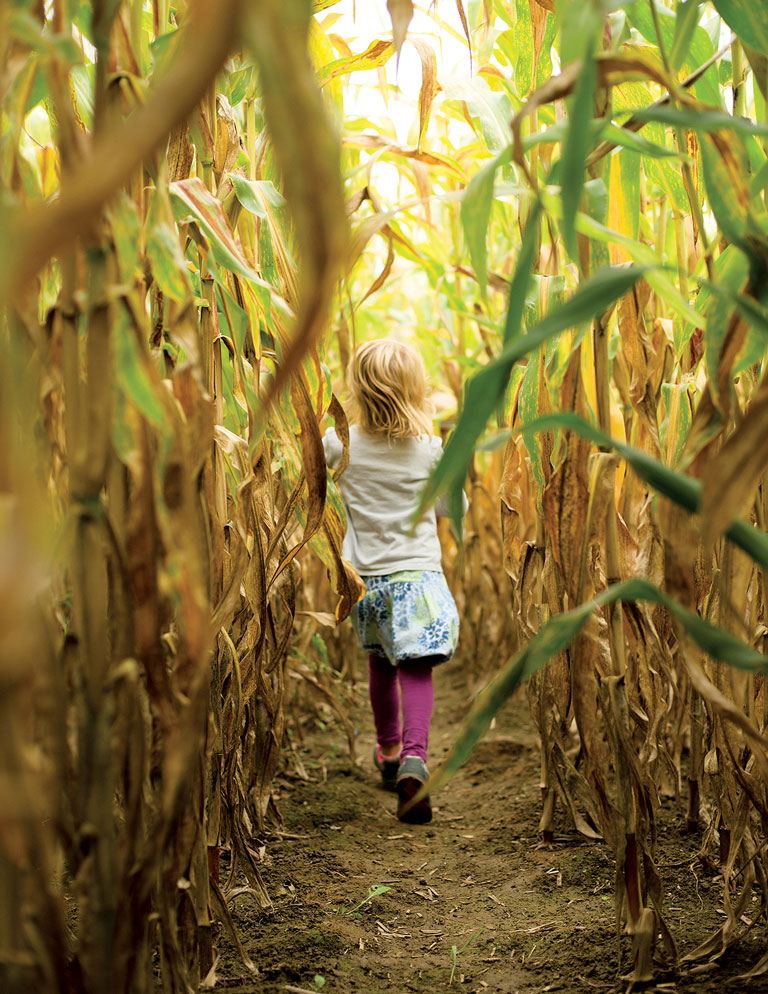 Beth’s Farm Market throws down the gauntlet to its visitors by creating a super-tough corn maze.

It’s not easy to watch the harvest winding down at Beth’s Farm Market. The Warren farm stand may well be the best in the state, with a fresh produce selection that rivals the supermarkets in its diversity (where else can you find Maine-grown callaloo?). But Beth’s softens our withdrawal symptoms with freshly pressed organic apple cider, pumpkin doughnuts, and even a taste of June — strawberry shortcake made with fresh (yes, fresh!) strawberries. Then Beth’s makes us forget about summer’s bounty altogether by offering amusements: hayrides, a 20-foot-high straw pyramid for climbing, and a 10-acre corn maze. Vincent Ahlholm, owner with his wife Beth, declares it to be Beth’s toughest maze yet. “There will be people calling 911 to be rescued,” he jokes.

It is an extremely difficult maze. It takes an hour-plus to do it with a map — and we aren’t giving out maps.

Ahlholm designed the geometric maze on his computer, then hired a specialist equipped with GPS technology to cut the design into the cornfield when the stalks were about waist high.

The corn now stretches 12 feet high, so it is virtually impossible to navigate by seeking distant landmarks. Participants, who ride to the maze on a tractor-pulled hay wagon, must make their way to checkpoints — eight in all — where they’ll find clues guiding them to the next stop (the labyrinth is actually two connected mazes, so they can bail halfway if pressed for time). At each checkpoint, they mark their journey either by scanning a QR code with their smartphone or punching a card. Those who visit every checkpoint receive a free mini pumpkin, and $1 of their $5 admission will be donated to a local charity (the maze is free for children age 6 and under).

Entertainment farming is a relatively new branch of the Beth’s enterprise, whose roots are in a small farm started shortly after World War I by Vincent’s grandparents. Finnish immigrants, they raised chickens and harvested blueberries for four decades, then sold the farm to their son, Vincent’s father, in 1960. Vincent, a graduate of the University of Maine’s School of Food and Agriculture, and Beth, who comes from a Pennsylvania farming family, bought the place in 1979, when it was just a few acres.

“We started with a little red refrigerator on a pallet by the side of the road, and we made $25 our first weekend,” Vincent recalls. Since then, he and Beth have cobbled together hundreds of acres of cropland, most of it in small, noncontiguous fields scattered throughout Knox County. They raise more than 100 different fruits and vegetables, including standbys like zucchinis, tomatoes, and green beans, as well as dozens of crops not commonly grown in Maine, like okra, fennel, and that callaloo, a leafy green introduced to the Ahlholms by their Jamaican workers, who make up a sizeable portion of Beth’s 50 employees.

As for the strawberries, they’re an ever-bearing variety that Beth’s harvests for 120 days (the Maine strawberry season is typically less than 25 days). They’re served in their own juice atop warm shortcake and topped with a whipped cream that is so rich in butterfat that servers dish it out with an ice cream scoop. The dessert was named one of the best dishes of 2013 by the James Beard Foundation, whose reviewer sighed, “With every bite I took I just kept shaking my head, saying, ‘This may be the most delicious thing I’ve ever had in my life.’”

Sounds like a perfect reward for finding one’s way through a corn maze.

How Maine’s International Border Got Its Shape

The Iconic, Ironic Boat and Tote