No. 19: Standard Baking Co. makes pastries like these. And now you can make them, too!

By Alison Pray and Tara Smith

The combination of fresh poached pears and sweet, nutty frangipane is delightful. This is one of our most popular holiday desserts, as well as a regular feature of our fall/winter pastry offerings. The pear flavor is improved by sitting overnight in the syrup and can be made up to a week ahead of time. Fresh plums, apricots, and tart cherries also pair beautifully with the almond frangipane and become the starlets of our pastry display when in season. This recipe makes one large tart. Divide the dough to make individual tarts.

Position a rack in the center of the oven and preheat the oven to 350 degrees. Line a baking sheet with parchment paper.
To dry the pears, place them on a paper towel and dab them to remove excess syrup. On a cutting board, place a pear half cut side down. While holding the pear together, slice it crosswise into ¼-inch slices. Repeat with the rest of the pear halves.
Remove the tart shell from the refrigerator and place it on the baking sheet. Using a rubber or offset spatula, spread the frangipane uniformly in the shell.
Pick up each pear half and fan the slices out, then place it on the frangipane with the narrow end towards the center. Fan the rest of the pear halves in the same manner and evenly space them on the top of the frangipane with their narrow ends almost meeting in the center.
Bake for 40 minutes, rotating the baking sheet half way through the baking time, until the crust is golden brown and the filling is set. The filling should feel firm to the touch and slightly springy. The fruit should be browning slightly around the edges.
Remove the tart from the oven and transfer it to a wire rack to cool slightly.
While the tart is cooling, prepare the apricot glaze: In a small saucepan over low heat, warm the apricot jam and 1 tablespoon of water together until melted and heated through. Remove it from the heat. With a pastry brush, brush the glaze over the fruit while the tart is still warm.
To unmold the tart, place it on a bowl or other object that is smaller in diameter than the tart pan and the ring will slip off. Serve warm or at room temperature.

In a small bowl, whisk together the almond meal, all-purpose flour, and salt.
In the bowl of a stand mixer fitted with the paddle attachment, beat the butter and sugar on medium speed until well blended.
Add the egg, rum, and almond extract and beat until incorporated. Scrape down the sides of the bowl and paddle as needed.
Add the flour mixture on low speed. Scrape down the sides of the bowl and paddle and gradually increase to medium speed. Beat until all the ingredients are well incorporated.
If not using immediately, transfer the frangipane to a tightly covered storage container and refrigerate for up to 3 days.

No. 20: The architecture respects the city’s past and has its eye on the future

Most of the seventy thousand cruise ship passengers who called on Portland this year spent their time ashore shopping, dining, and exploring the Old Port, the city’s commercial heart and premier tourist attraction. It’s hard to believe that fifty years ago, this seaside, nineteenth-century business district was being razed one building at a time. It and many other Portland neighborhoods were saved by a movement that sprang from the rubble of a beloved landmark, Union Station, one-third of a mile east.

The demolition in 1961 of the grand French Châteauesque railway terminal to make way for a squat, bland shopping plaza shocked a small group of residents into organizing what would eventually become Greater Portland Landmarks, the city’s leading advocate for historic preservation and design excellence. But the lesson of Union Station had a steep learning curve. Scores of buildings — from blocks of brick townhouses and ship captains’ homes on Spring Street (razed to make way for the Holiday Inn) to stately institutions like the Old Post Office at Exchange and Middle streets (demolished for a parking lot) — would be erased from the streetscape over the next three decades. It wasn’t until 1990, when a spruced-up Old Port was proving the economic value of its Victorian streets, that an ordinance protecting Portland’s historic architecture was put in place.

Today Portlanders are proud of their beautiful city, and that pride is being expressed in the handsomely designed and frankly contemporary buildings that have sprung up in the last decade — places like Ocean Gateway, the renovated Portland Public Library, and the glass-steel-and-lead-coated copper Bramhall Building at 490 Congress Street. This is the surprise bonus in the lesson of Union Station: Portland is not a museum. We can still build landmarks, fine ones. They are our generation’s contribution to the city’s narrative. They tell our love story. —Virginia M. Wright

No. 21: The Reiche School is a true melting pot

The Howard C. Reiche Elementary School is a public neighborhood school that serves children between kindergarten and fifth grade in Portland’s West End and Parkside neighborhoods. It represents a small slice of Portland, yet, thanks in large part to the diversity of the Parkside neighborhood, a significant portion of the world.

Out of 365 students:
Fifty-two percent are learning English as a second language.

Four language facilitators are on staff that speak Somali, French, Spanish, and Kinyarwanda.

Numbers from June 25, 2012, article on gourmet coffee shops in Mainebiz

Laura Serino started Fore Front Fashion blog in July 2010 to be a proud voice touting Portland’s emerging fashion scene. It began as a collection of street-style photos in the style of Bill Cunningham, but it has grown to be an advocate of buying locally at the increasing number of Maine-made clothing stores. Serino tells us what she admires about Portland’s fashion sense: “There’s actually a lot of fashion in Portland — although those who don’t know any better might scoff at that. The variety makes shopping in Portland so satisfying: you’ve got high-end boutiques, vintage clothes, consignment stores, the Portland Flea-for-All (flea market) — the opportunities to grow your closet are endless. The best thing about fashion in Portland is that we aren’t trying to chase any trends or beg to be a part of the fashion elite. That lack of pressure gives Portlanders a sense of freedom with how they dress. There’s no one way I can describe the style except to say that it’s diverse. You’re able to really develop your own personal style here.”

No. 24: Nothing beats the late night food…

No. 25: Every First Friday, the art scene takes over Congress Street

No. 26: In the Portland Room, there’s always an old story to discover

Abraham A. Schechter, the special collections librarian and archivist at the Portland Room at the Portland Public Library for the past seven years, shares some facts about the city he loves:

Teacher with students at Portland Observatory: “That’s Bug Light out there!”
Third grader: “That’s what my dad drinks, Bud Lite!”

Posted on the blog Overheard in Portland 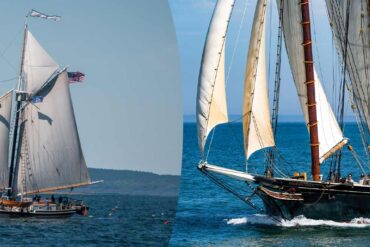