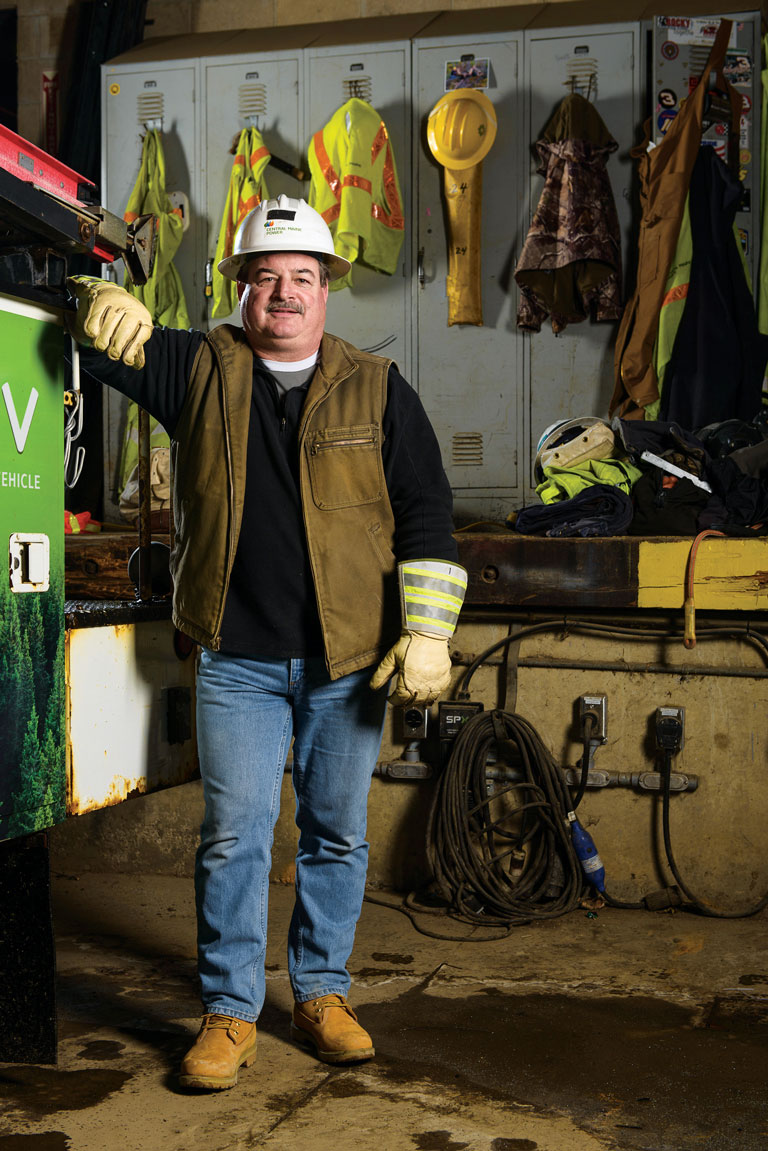 [I]t may be the best known Maine-ism since “you can’t get there from here”: “No line is safe to touch — evah!”, the Central Maine Power safety message delivered in TV spots for more than two decades by a hard-hatted, mustachioed lineman named Jim Wright. Wright — not an actor but a real lineman — was recruited for the commercials after a chance meeting with a CMP marketing employee in 1992. Now, he’s a Maine household name. He even has an online fan club with more than 150 members.

Your accent sounds like the real deal. Did you grow up here?

I did, mostly along the coast. Later, we moved to the Skowhegan area, but we still kept a camp down in the Bristol-Bremen area. Growing up, I spent every day of my summers out on a lobsterboat.

Is it true that you were initially told to lose the accent?

It was more of a concern with my wife. She said, “Make sure you talk very clearly and pronounce all your Rs.” I said, “What do you mean? I do!” I was trying to make her proud. Well, those first three commercials took 128 takes! The director and the producer were like, “Something’s not right. Relax a little. Just say it the way you want.” That’s when I said, “Evah!” It came out as natural as could be, and that’s what they wanted. From that point on, whenever I’ve had an opportunity to do commercials and safety messages, it takes two or three takes and we’re there.

Do people recognize you when you’re out and about?

All the time. People say, “You’re the guy who says ‘evah’!” or “Have we met before?” I have a little fun with it. I say, “Do you watch much TV? Well, I’ve been in your living room.” It’s humbling, and it’s fun. I’ve gone to a few schools to show our gear to the kids, and they’ll say, “I told my father he’s not supposed to touch the lines ever.” That makes me feel really good.

Where’s the most unexpected place you’ve been recognized?

The airport in Puerto Rico. I was at the counter trying to change my flight, and the person in line behind me says, “Hey, you’re from Maine! You’re the guy from that TV commercial!” We turned around and asked, “How did you know?” They said, “We can tell by your voice.”

I supervise transmission high-line crews. We’re out in the middle of the woods from Kittery to Houlton, checking whether transmission lines are energized or dead and working with equipment to keep things going. We start at 6 in the morning on a 10–12-hour day.

What is the most memorable workday of your career?

The ice storm of ’98. The amount of damage is burned into my memory, but more important was the generosity and patience of the Maine people. People had been without power for days, but they were looking out for us: “Can we get you coffee? Doughnuts? Hey, I just baked some muffins.” I never came across anyone who was disgruntled.