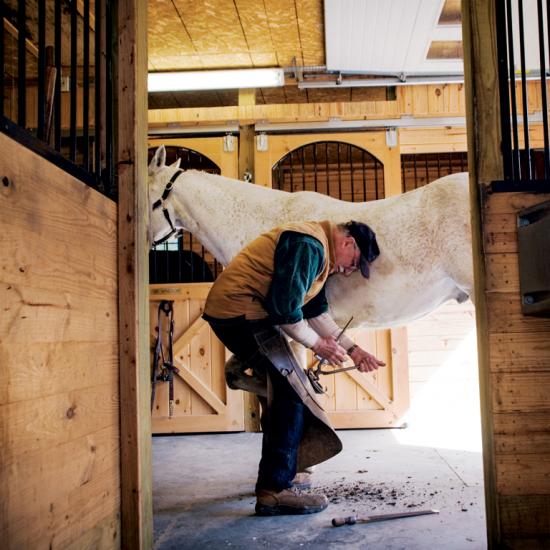 Farrier-bard Fred Bowers waxes eloquent about horses and all they’ve taught him.

Fred Bowers hops out of his white truck (license plate: SHUUZ), removes his anvil, and sets it up outside the barn door. The bumper sticker on his anvil says, “Know feet. Know horses.” Bowers knows both. The first appointment of his day brings him to Virginia and Mike Albert’s Venture Farm, a premier show horse training facility in Pownal. “Show-jumping is a precision sport, one that takes a high degree of practice. It’s done in an arena and is graded on beauty and equitation of the form.” Bowers is an avid reader with a couple of college degrees, and his delivery is as elegant as it is casual.

Dressed in jeans, white polo shirt, and steel-toed boots, he slips into his leather apron and greets Inman, a bay Dutch Warmblood with an illustrious jumping career and two scuffed-up front shoes. A staff member tethers Inman just inside the barn door, situating him on a rubber mat that keeps his legs from becoming fatigued. “The tether isn’t to keep Inman here — he’s powerful enough to break free — but to cue him as to where he needs to stand while I work on him,” explains Bowers. At six feet, Bowers’ height pales in comparison to Inman’s seventeen hands. Despite this disparity, Bowers moves effortlessly, positioning his gear with efficient grace.