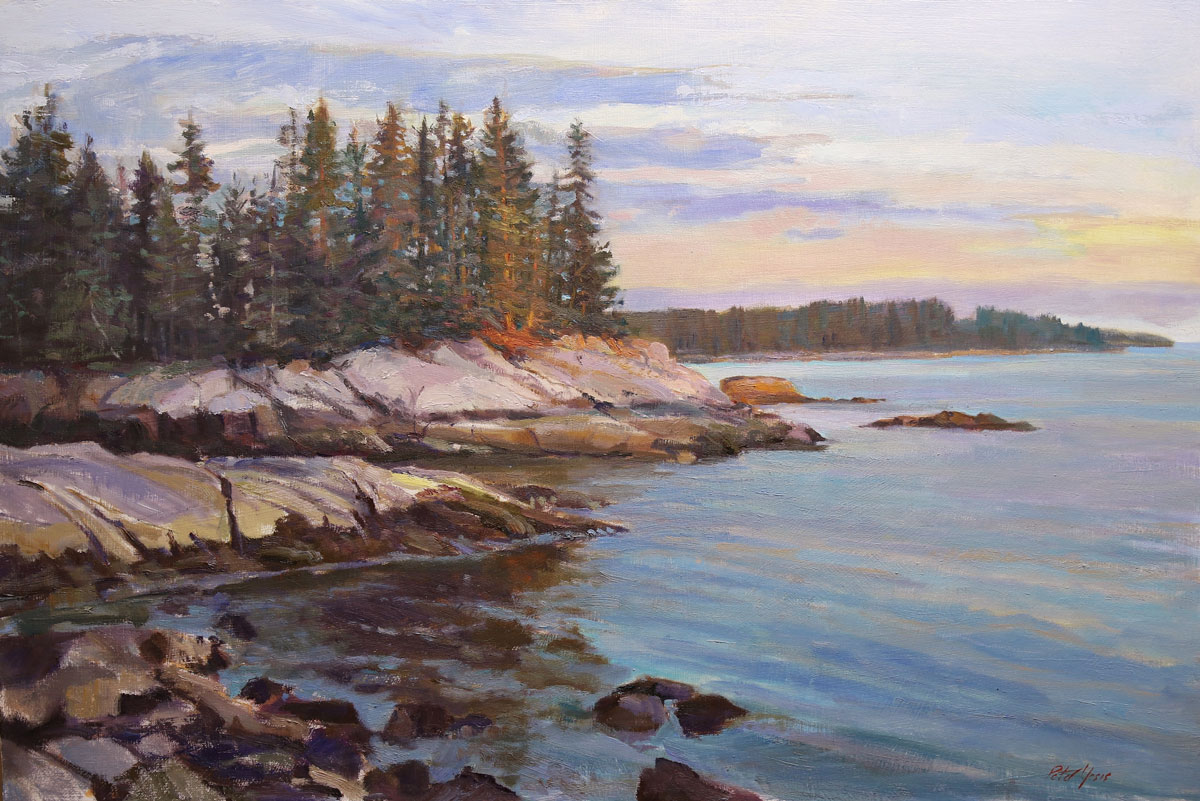 The Art of Giving is Down East’s annual celebration of Maine art, artists, and the community organizations they hold dear. Each year four artists are selected to have their work shown at a reception, and a portion of proceeds are donated to a community organization. This year, due to COVID, the event has moved to an online format. Learn more about this year’s selected artists and preview some of their selected works below.

Peter Yesis has been painting since he was a kid. “I wanted to be the next Norman Rockwell,” he says. “But I never had the confidence to go out and make it a career.” After graduating from commercial art school, he took a job at an engineering firm that unfurled into a career in electrical engineering. His painting was relegated to hobby status. But by the time Yesis was 50, he’d reached a breaking point.

“It was one Monday morning meeting that just went too long,” he says. “I came home and told my wife, ‘I just can’t go to one more meeting.’” Yesis and his wife mapped out a five-year exit strategy that included a move to Maine, and he started pouring more time off into painting. Buoyed by awards at regional, state, and national art shows, he left corporate life for good to pursue painting full-time in 2006.

Yesis and his wife now live in Searsport, and Yesis spends his days in front of an easel instead of behind a desk. His soft, realistic oil landscapes have been commissioned for the Oxford County Courthouse and Waldo County Justice Center and his work hangs in galleries in five states. He loves painting the sea, the pine trees, and the mountains in the distance. “I could stand in one place and just turn a few degrees and there’s a painting, then turn a few more degrees and there’s another painting, and that could go on forever,” he says. “I just drink it up.”

Growing up in New York and raising a family in Boston, Rhonda Pearle heard a lot about the beauty of Monhegan Island. But a visit to the famous art colony in 1995 changed her life.

“I was so inspired by the beauty,” says Pearle, whose career in graphic design has included stints with the New York Mets, the Miami Dolphins, and public television. “To be in a place that was so detached from the world that we came from, with all this walking and hiking and the ocean, and no cars, was just so special for us.”

Seeing so many artists, working in their studios and stationed on the cliffs with easels painting en plein air, “a door just opened for me,” she says.

Pearle and her husband, Gary Perlmutter, who is also a painter, moved with their kids to Cumberland in 2008, and three months later opened Bridge Gallery in Portland, near the Portland Museum of Art, where she now volunteers as a docent. Pearle relishes the often messy work of creation, and the process of throwing, dripping, scribbling, and smudging on giant canvases with her fingers and brushes to explore movement, form, and light. She uses acrylics as a base color for her paintings, then applies oil paint and pigment sticks that create layers and texture, often integrating the words of music and poetry that inspire her.

The salty Atlantic has always called to Derek Moore. Growing up in New Jersey, he surfed and fished in the ocean every chance he got.

“Every time I go to the coast, it feels like a new experience because of the changing tides, the waves, and the shells,” he says. “And that feels refreshing.”

He studied biology at the University of Rhode Island. And when he got an opportunity at the Maine Department of Inland Fisheries and Wildlife, studying the movements of endangered turtles and snakes using radio telemetry, he jumped at the chance. He sketched and painted the fish as a way of studying them.

“The medium is the same, yet the result is always slightly different,” says Moore, who lives in Kittery. “And that’s what I really enjoy.”

In 2017, Moore began picking up pieces of driftwood and discarded barn boards that he found on the beach, and using them as canvas. “Some of my favorite pieces are dictated by the patterns in the wood,” he says. “You might find one piece that looks like a brook trout and another that looks like a trigger fish.”

In 2018, Moore started sharing his paintings on Instagram and Facebook @lowtidelumber. He got such a positive response that he decided to start selling his work. “I owe that transition to family and friends who have given me such an awesome response,” he says. “They always believed in me.”

It’s rare to find a résumé that includes finance director and fine art, but to Diana Roper McDowell, both avocations feel equally natural.

McDowell, who recently retired from her post as finance director for Friends of Acadia, has painted ever since she can remember. After graduating from Mount Desert Island High School, she took classes at the Norton Gallery and School of Art in Florida. She returned to Maine, majored in art at the University of Maine for a few years, and continued to paint on nights and weekends, even as a job in accounting blossomed into a career in finance. She started displaying and selling her paintings in 2001 to help pay for the expense of framing.

McDowell chronicles the often painstaking creative process on Facebook, @roperart, offering photos of her sketches and paintings in progress, with candid commentary about her challenges.

She primarily works in watercolors, based on sketches she makes from photographs. Her landscapes, seascapes, and renderings of barns and wildlife are being shown at Artemis Gallery in Northeast Harbor, Maine.

View from Norumbega, which is based on a scene from Acadia National Park, has all the elements that McDowell describes as abstract realism. Green triangular shapes represent evergreens, while red blocks signify huckleberry in fall, and black lines denote cracks in the granite ledge. The cairns, which are portrayed realistically, are the painting’s focal point.

“I love the serenity in this painting,” McDowell says. “It calms me to look at it.”