In Lisbon Falls, two brothers live out their culinary dream. 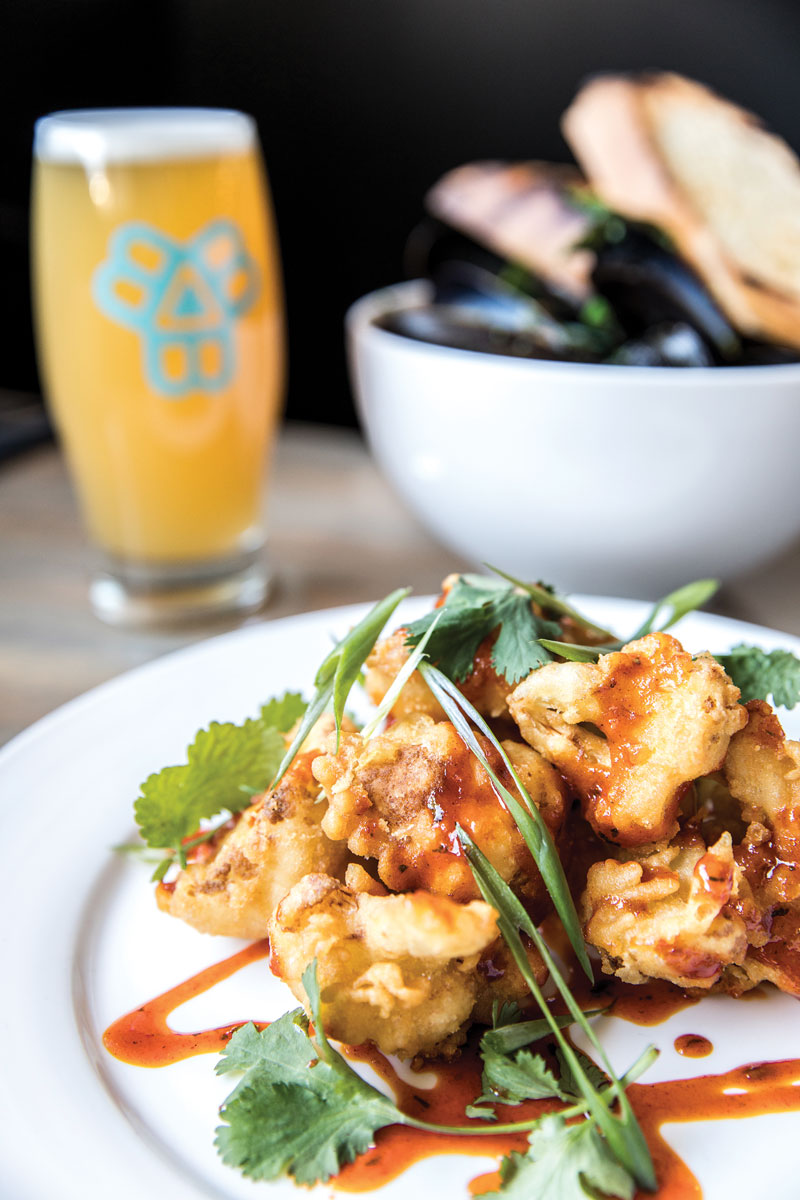 Lunchtime
The lunch menu is a short version of the dinner menu but with a few additions, including a Reuben riff: beef brisket, kimchi, Swiss cheese, and koji mayo on ciabatta.

Baked Goods
The kitchen came with a full bakery set-up already installed, which the LaVerdiere brothers use to bake breads and desserts, like their fudgy chocolate cake.

The brothers grew up an hour away, near China Lake. Their dad was an executive in the family business, LaVerdiere’s Super Drug Store chain (bought in the ’90s by Rite Aid), and he let them tag along on business trips. Dining out all those nights got the young brothers hooked on restaurants. As adults, they toyed for years with the idea of starting their own. Tyson worked at a couple of Waterville eateries, then went to school to study business and classical arts. At Flux, he manages the dining room and oversees the bar program, with 30 wines by the glass, a dozen Maine beers on tap, and a lineup of nicely balanced cocktails. Jason spent a decade cooking in Maine restaurants, most recently as sous chef at Walter’s, an upscale spot in the Old Port. At Flux, he’s running his own kitchen for the first time.

The menu reflects global influences, from Mediterranean to Korean, and Jason has a knack for injecting creativity into crowd-pleaser items. For the crispy chicken sandwich, he marinates the chicken in buttermilk and koji, an umami-rich fungus common in Japanese cuisine. He wants his cooking to feel adventurous but also familiar, so that diners know they’ll like whatever they order. “People want to bet on a winning horse,” he says.

Take a familiar Maine dish like steamed mussels: Jason’s spin is to make a broth out of Bissell Brothers’ fruity, hazy Substance IPA and a compound butter with lemongrass, kaffir lime, and lemon zest — ingredients that mimic the characters of the hops. The result is complex — yeasty and citrusy — and wonderful to soak up with house-baked semolina baguette. But the chef also knows when to defer to the simple goodness of his ingredients. A grilled whole sea bass stands on its own, and beef from Riverwind Farm, in Vassalboro, shines in a ragu atop house-made pappardelle.

In a downtown that otherwise has a pizza joint, a Chinese takeout, and a couple of pubs, Flux hits a sweet spot between comfort food and fine dining. If the LaVerdiere brothers keep making dishes and drawing crowds like they did the night I visited, I’d wager they’ve bet on a winning horse.

Down East and Outside Staffers on Our Favorite New England Beers