No ocean liners necessary: Rich Wills dreamt up a different kind of cruise along the Maine coast.

[dropcap letter=”O”]n a golden Thursday evening, Rich Wills slid his 17-foot dory into placid waters off Portland’s Eastern Prom. Navigating the maze of moored sailboats behind him with a quarter-size mirror attached to his sunglasses, he started recollecting the 349-mile row he’d taken earlier this summer, up the entire length of the Maine coast. “It’s all kind of gray now, kind of foggy,” he said. “But I’ve got it written down.”

A 51-year-old father of two, Wills lives in Kennebunkport and works as a plant manager at Volk Packaging, a box manufacturer in Biddeford. He grew up canoeing in northern Maine, but he’s only been rowing since 2008. A few years ago, he started plotting his Kittery-to-Campobello trip, pouring over nautical charts on lunch breaks, spending evenings scouting islands and coves where he could lay up in an emergency. Rowing at his usual rate, 32 strokes per minute, he figured he could cover 20 to 30 miles a day. “That comes out to 125,000 strokes to Canada,” he noted.

On June 16, Wills set out, equipped with limited technology: handheld GPS to track distance and speed, VHF radio, personal locator beacon. “I like simplicity,” he said. “This is my boat. I’m the motor.” For sustenance, he brought MREs, energy bars, dehydrated food, and 14 gallons of fresh water.

To ‘cure the monotony’ of long hours on the water, Wills listened to the rhythm of his 9-foot, Orono-made Shaw & Tenney oars, sometimes varying his stroke to alter the sound.

Passing Kennebunkport, he met his daughters and wife for a Father’s Day brunch at a waterfront resort. At Port Clyde, he stopped for a few gallons of extra water and an omelet. On Vinalhaven, he grabbed a coffee and sandwich. On Little Cranberry Island, he had dinner at Islesford Dock Restaurant. In Lubec, a woman let him borrow her car to go into town for pizza. “I ate the whole thing, drank a half gallon of milk, and slept like a baby.” 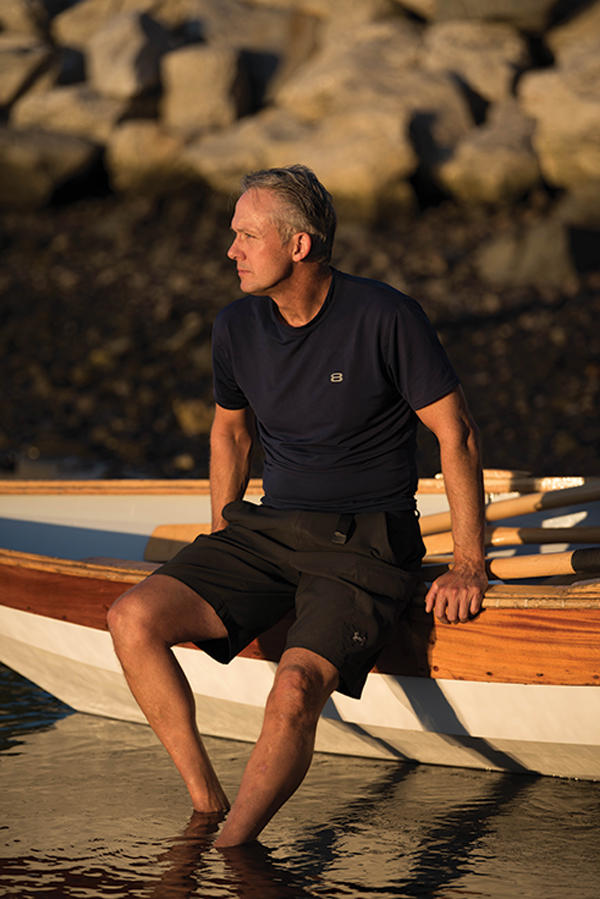 Otherwise, Wills encountered few people. Along Down East’s remote, exposed Bold Coast, lobstermen occasionally checked up on him. To “cure the monotony” of long hours on the water, Wills listened to the rhythm of his 9-foot, Orono-made Shaw & Tenney oars, sometimes varying his stroke to alter the sound. He also spent a lot of time “thinking about people who already passed, who I admired, all coming together, like a trip back in time. It was weird in that respect. I was having a hard time one day, and I caught myself complaining out loud, and I thought, ‘Who you complaining to? No one can hear you.’”

At 1:30 a.m. on June 28, 12 days after setting out, his dory illuminated with glow sticks, Wills left Cross Island under a bright moon for the final stretch of water to Campobello Island. If he was still married, Wills had joked, his wife would be there to pick him up.

Rowing back toward the Eastern Prom, reflecting on the experience of the prior month’s trip, Wills pulled the oars out of the water and studied the coastline. “I’ve had some stupid ideas,” he confessed, contemplating what he might do next. He said he’s toyed with the idea of the R2AK — a 750-mile race from Port Townsend, Washington, to Ketchikan, Alaska. “But whenever I have those thoughts, I just tell myself to sit down.” Then, he patted his bench seat and put in a stroke toward shore.