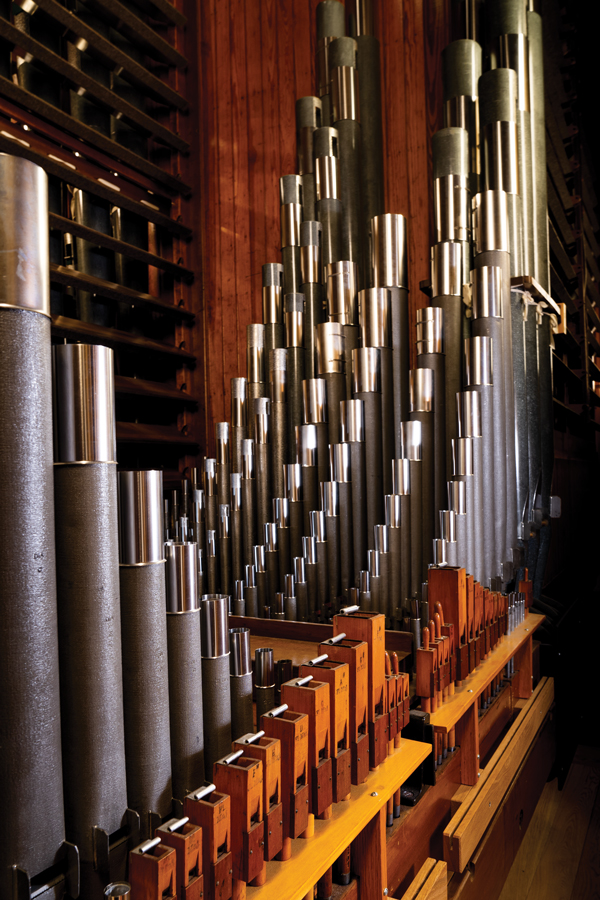 [dropcap letter=”T”]he Kotzschmar Organ has 7,101 pipes that, collectively, would run 3.6 miles end to end and, individually, range in length from a fraction of an inch to 32 feet. When they were first assembled in Portland’s Merrill Auditorium in 1912, they formed the then–second-largest organ in the world, a wonder for rapt audiences to behold.

Over time, though, pipe organ’s prominence in the culture has diminished — the Kotzschmar is now one of just two municipal organs still in regular use nationwide. But James Kennerley, who took over as the city’s organist a little over a year ago, thinks the trend is reversible. “This was once the coolest thing, and everyone wanted to be a part of it,” he says. “That’s what we’re trying to recreate. But instead of some high religious experience, it’s like, ‘Guys, we’re just here to have fun.’”

A big part of having fun, for Kennerley, is finding fresh collaborators, to mix up the program. A few months ago, Metropolitan Opera soprano and Bangor native Ashley Emerson joined him on stage. Now, he’s hashing out plans to play alongside Portland-based disco/funk cover band Motor Booty Affair.

Kennerley, 34, grew up in the U.K., where, as a church choir boy, he fell in love with pipe organs. Later, he settled in New York, serving as organist at a historic Episcopal church. Along the way, he has played at Washington National Cathedral, St. Patrick’s Cathedral, and Westminster Abbey, but the Kotzschmar was always on his bucket list. When Ray Cornils announced plans to retire after 28 years as Portland’s municipal organist, Kennerley jumped at the opportunity.

Next up, he’s celebrating Johann Sebastian Bach’s 334th birthday with a concert on March 20. He’ll perform some of the German composer’s organ pieces as well as adapt other arrangements originally written for ensembles and orchestras. Bach, Kennerley says, “was the absolute dude when it came to pipe-organ music.” When people feel the raw energy that resonates up from those thousands of pipes, he adds, they can’t help but get hooked: “You cannot describe it. It’s like describing the effect of seeing the Mona Lisa. You can try, but words fail.”