When Catie Denning joined a new gym in 2014, she didn’t imagine that three years later, she’d be in a steel cage in a Lewiston arena repeatedly planting her fist in the face of a Coast Guard cook from Boothbay. She’d started taking classes at Young’s MMA just for the exercise. Soon, though, she noticed that she could move fast and hit hard. Her coach noticed too and invited her to join the Bangor gym’s fight team, members of which train for bouts around New England. Last year, she won her first amateur match, then lost her next one. On February 1, she’s on the card again, at Bangor’s Cross Insurance Center. Denning, who was a teaching assistant at Bucksport High for a little while and now tends bar at Hero’s Sports Grill, is working toward a master’s degree in human-resources management. In the cage, she mostly wants to manage to beat the crap out of the human in there with her, but she does have a soft spot: a warm fuzzy feeling for animals. She commits to donating a chunk of her earnings to a local shelter after each fight, win or lose.

How do people react when you tell them you’re an MMA fighter?

It’s funny, every time I tell someone new, they’re like, ‘Yeah, okay. No.’ I do have this sort of girly-girl feminine side to me, but when it comes down to it, I also have this aggressive cage-fighter side to me that loves this sport. Just because I’m a nice person, does that mean I should take up competitive knitting? No. How cool is it that I can play both sides of that?

Did you have any fighting experience?

A lot of people who compete in mixed martial arts have some background, like they wrestled in high school or they did jiujitsu. I didn’t. Everything has been a learning experience, and I became addicted to getting better and improving myself. It got to the point where I was like, “I’m sick of coming to practice and getting beat up all the time with nothing to show for it.”

Have you gotten injured?

Back when I first started, I fractured my ankle. I partially tore a ligament in my knee. I have a spot on my calf that got pinched, and I have nerve damage on it — no feeling there. I’ve had a rotator cuff injury for probably a year now that has never gotten better. I just ignore it.

I was just going into it to have fun. You really don’t know what to expect until you’ve taken the leap for that first fight. Some fighters go in and completely dominate and surprise everybody, some of them just completely shut down and sort of black out. I didn’t know what was going to happen. The second the cage door shut behind me, I was ready.

You’ve gotten press for donating your earnings to the Humane Society.

I love animals. I have two cats, and one of them came from the Humane Society. As an amateur, I get a percentage of my ticket sales, which isn’t a whole lot. When it comes to sales of my shirts and sweatshirts, I really don’t need the money, so whatever I can sell I donate to the Bangor Humane Society. My first fight, I raised $300. My second fight, I raised $400. So, in February, I want to raise $500.

For tickets to Catie Denning’s February 1 brawl in Bangor, visit crossinsurancecenter.com or call 207-561-8300. 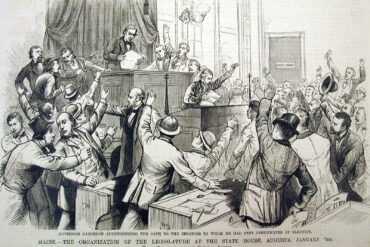