Hibernation is a marvel no matter the creature, but black bears do it best, managing to stay warm, strong, and healthy through months without food or activity. Oh, and their cubs are pretty cute, too.

[dropcap letter=”I”]n early January, in a spruce-fir forest 20 miles southeast of Greenville, two bear cubs are born in the pitch-blackness of a den concealed by two feet of snow. It is minus 20 degrees, but strong northwest winds make it feel much colder. Inside the bear’s lair, however, it’s a balmy 32. Weighing a mere 12 ounces each, the two 8-inch-long cubs suckle teats on the sow’s sparsely furred underside and snuggle against her skin, which radiates warmth ranging from 88 to 98.6 degrees.

By mid-April, the furry cubs, with wide dark eyes and oversized paws, emerge from the den, inching forward on unsteady legs to greet a strange new world. In the four months since their birth, each cub has ballooned to 4 to 6 pounds, while their lactating mother sacrificed 33 percent of her weight to aid their growth. Many sows with multiple cubs emerge from their winter den as “walking skeletons,” according to Maine Department of Inland Fisheries and Wildlife (IF&W) bear biologist Randy Cross.

Winter is the season of highest mortality for Maine’s deer, foxes, bobcats, and other wildlife. But the opposite is true of black bears. They are masters of winter survival. Fewer than 1 percent of Maine’s black bears die in the winter, Cross has found, their lowest mortality of any season (the state’s bear population is estimated at 31,000). Due to their high winter body temperatures, a benefit of their large bodies and thick pelts, black bears are among the most highly efficient hibernators in North America. Their metabolic rate drops by 50 percent, and they sleep for five to seven months — early October to mid-April — without eating, drinking, urinating, or defecating. By contrast, rodents such as chipmunks and woodchucks, whose hibernating body temperatures hover around 40 degrees, must awaken every few days to raise their temperatures to 94 degrees. 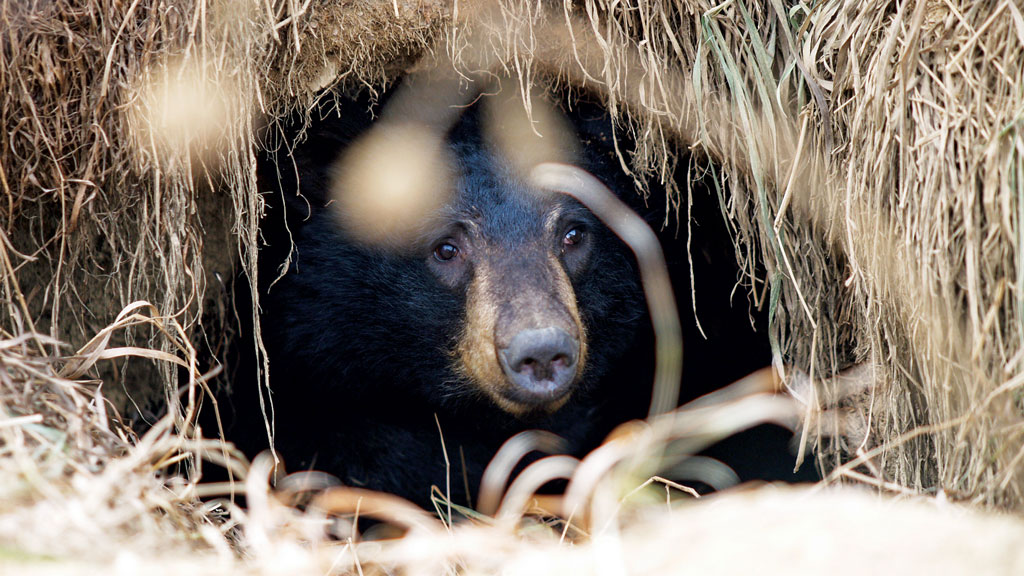 [dropcap letter=”A”]s a wildlife biologist for IF&W, I had the unusual pleasure of crawling into an active bear’s winter den on three occasions to help fellow biologists tranquilize female bears and replace dying radio collars. On two occasions, the alert sow’s 120 heartbeats per minute could be heard outside the den opening. She huffed and snapped her jaws to threaten me. My third trip inside a den was quite different. The sow was sound asleep, even though her frightened cubs were bawling loudly. Biologists have recorded hibernating bear heart rates as low as nine beats per minute and one breath every 45 seconds.

Winter hibernation is an evolutionary survival strategy to conserve energy during a season when food and water are in very short supply. It requires drastic physiological changes, which have attracted the attention of researchers at Washington State University and California State University at Long Beach, who are studying how bears remain healthy in winter. Their findings could prove useful to advancing human medicine. For example, winter bears living solely off their fat reserves have cholesterol levels more than double their summer levels — levels that in humans would require prescription medications. But bears do not experience hardening of the arteries, nor do they form cholesterol gallstones. Their liver produces a bile fluid called ursodeoxycholic acid, prescription forms of which are used to dissolve gallstones in people. (In China and other countries in East and Southeast Asian countries, so-called “bile bears” are inhumanely kept in captivity so their gallbladders can be “milked” for bile, an ingredient in traditional Chinese remedies.)

Moreover, although hibernating black bears don’t urinate, they do not suffer from urea poisoning. Rather, urea is broken down and the nitrogen from it is recycled to build protein. This partially explains why hibernating bears don’t lose muscle strength or bone mass, unlike bedridden people or other mammals that develop osteoporosis when they maintain non-weight-bearing positions for extended periods of time. 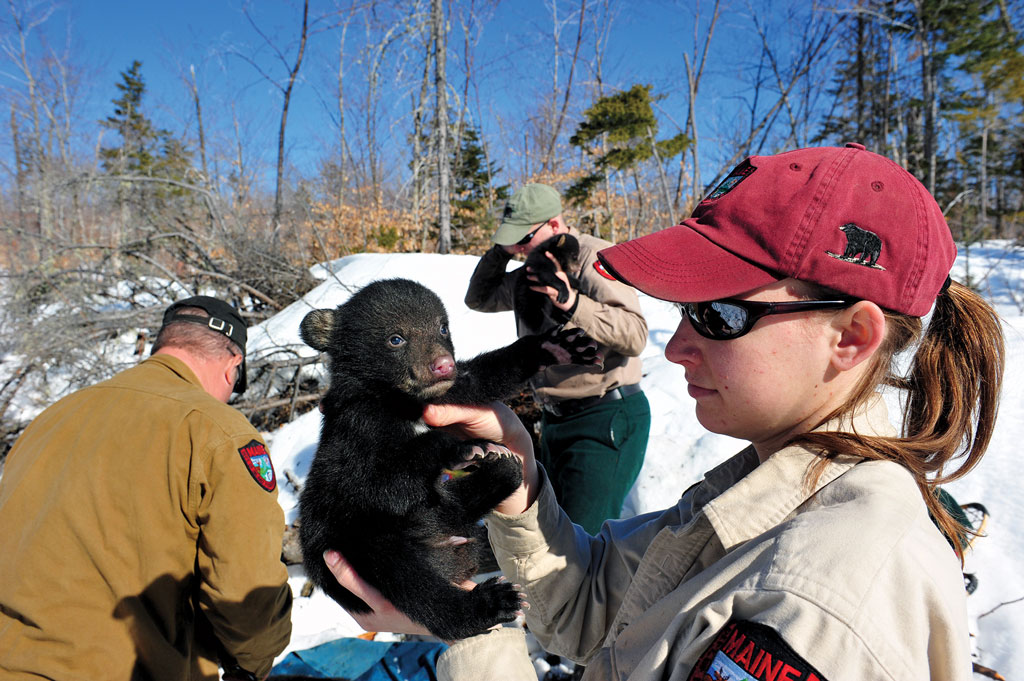 Bears gain weight rapidly in summer by feeding constantly on carbohydrate-rich blueberries, raspberries, chokecherries, apples, and wild sarsaparilla berries. Once every two to three years in autumn, northern Maine’s forests produce bumper crops of beechnuts and beaked hazelnuts. The fat-laden nuts provide foraging bears with up to 20,000 calories a day, and the animals will even postpone hibernation until November to take advantage of the abundant food.

The 4-month-old cubs that emerge from their den near Greenville will remain with their mother for 16 to 18 months, and she will not breed that summer. Instead, she’ll teach her cubs the ins and outs of life in the North Woods.

In June 1989, from a duck observation blind in the woods north of Moosehead Lake, I watched a mother bear teach her cubs how to excavate buried snapping turtle eggs in a gravel bank next to a beaver pond. She sniffed the gravel along the edge of a logging road, and then dug for a few seconds to unearth another turtle nest, before ambling along until another clutch of eggs was discovered. Her playful cubs would race up to the turtle nest and eat the exposed eggs. The sow repeated the egg excavation exercise a half-dozen times, eating a few eggs herself but leaving most to her young. It was like watching an Easter egg hunt.

Come fall, our yearling cubs will enter the den with their mother, but not before she teaches them how to construct a den. One biologist observed two yearlings raking leaves and balsam fir branches into a den that the family would occupy that winter. Minutes later, their agitated mother removed all the material and started over, teaching her attentive youngsters the correct way to make a winter bed. First, she carpeted the den with strips of cedar bark a foot thick. Then, on top of that, she deposited the leaves and fir boughs collected by her cubs.

[dropcap letter=”A”]fter spending a second winter denning with their mother, yearlings become independent and she goes into estrus in the spring. “Yearlings remain very close to their mother’s home range in the first couple years after separating from her,” Cross says. “As her female offspring mature, they tend to slowly establish their own home range, often immediately adjacent to their mother’s. I have seen daughters with cubs visiting their mom with her cubs, which would be aunts and uncles in our world.”

Several years ago, a logger delivered a tiny, emaciated cub to my Greenville office.  He had accidentally backed his skidder over a bear’s den, killing the mother and one cub. I lowered the surviving 2-pound cub into a small, towel-lined cardboard box, loaded it in my truck, and began the 40-minute drive to the farmhouse of Martin French, a wildlife rehabilitator in Dover-Foxcroft. I stopped at a red light alongside a school bus full of children. The cub poked its head out of the box and stared out the passenger side window. The kids were crammed up against the windows, excitedly pointing at the bear cub. 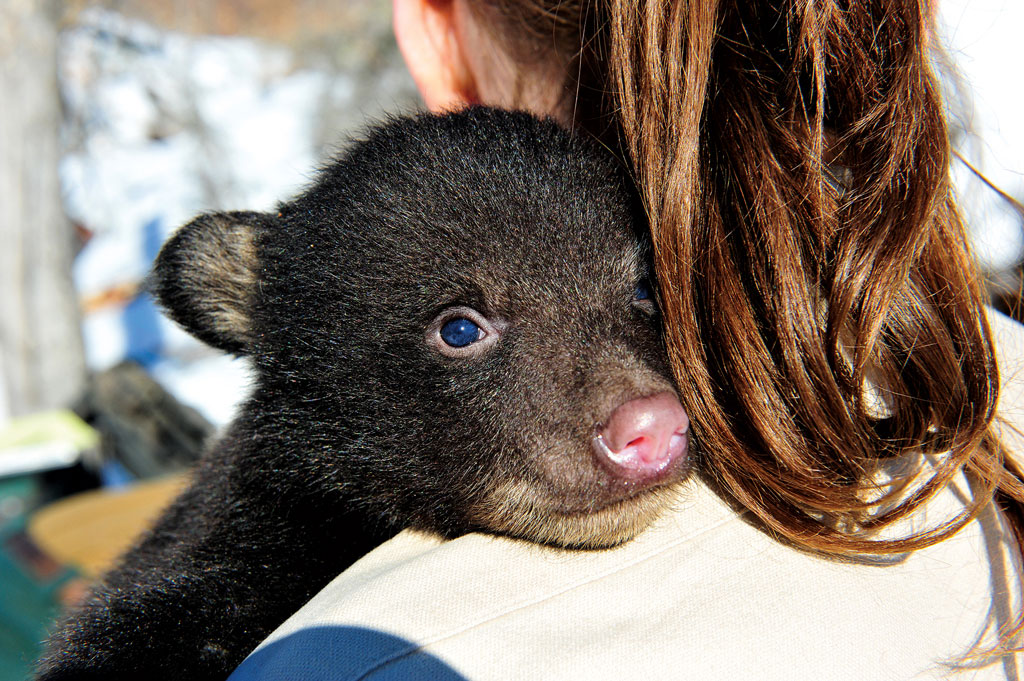 Three weeks later, the cub had gained 6 pounds in Martin’s care. His phone call is still fresh in my mind. “Ron, you’ve got to come get this cub,” he said. “He’s a terror, constantly tugging the cage, and he’s eating me out of house and home. The cub wants his freedom, and I want it for him.”

It’s a gamble finding a natural home for an orphaned cub. Sometimes a mother bear will kill a cub that’s not her own. But we had to try. With the help of the Maine Fish and Wildlife office in Bangor, we placed the cub in a den with a mother and two cubs of a similar age. Some weeks later, I was relieved to learn that the sow adopted the orphan cub.