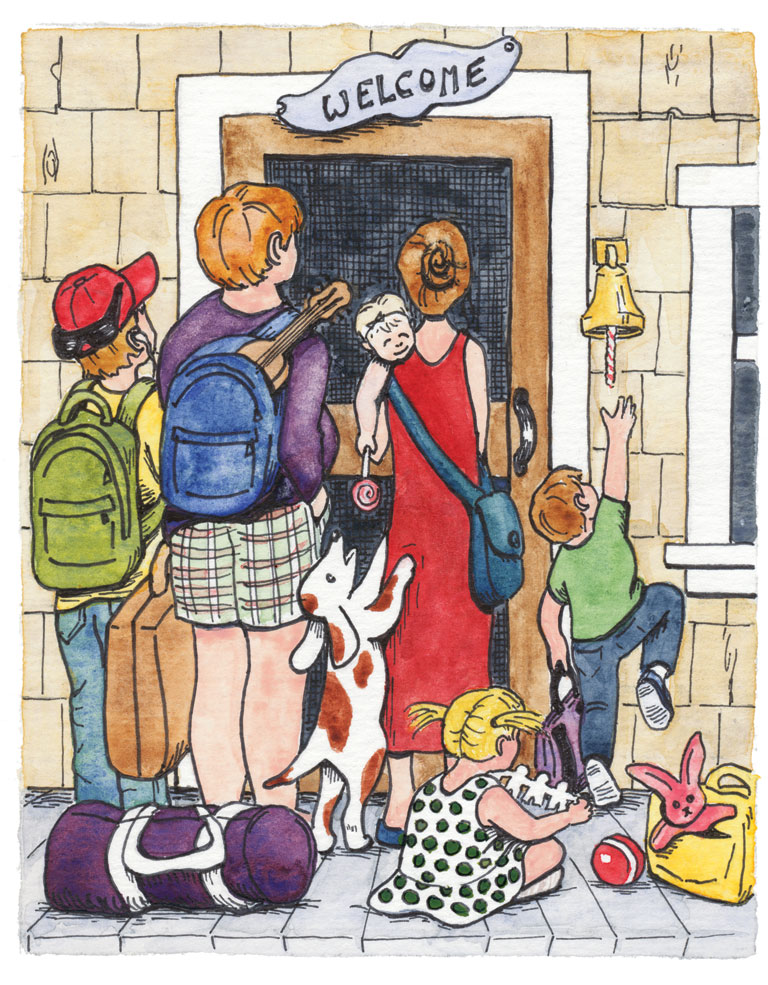 Benjamin Franklin said houseguests and fish smell after three days, but this doesn’t stop some people from staying longer. For years, our Midwestern friends didn’t visit our summer house in Maine, but word eventually got out, and now every summer we host a series of houseguests, like a string of paper dolls joined at the duffle bag.

For this (like most fiascos), I blame my husband. After two glasses of Rioja on any December Saturday night, Peter will slap the closest warm body and with a rush of affection and generosity say, “You should really come to Maine this summer.” He turns to me for confirmation. I smile and whisper, “Of course,” praying said friend will divorce before July, or at the very least, put his three children up for adoption.

“Don’t worry,” Peter reassures me the next morning. “They won’t all come.”

But they do. By April, we are expecting seventy-nine house-guests, half of whom are vegans, and the other half who own Bernese Mountain dogs.

You learn a lot about friends when you share tight quarters, like which mothers wake up and unload the dishwasher and which plop down on a porch rocker, and ask, “Is there anything I can do?”

My friend Eileen, generous to a fault, has hosted her share of deadbeats. “We got to the point where we wondered if we should stop inviting guests because the better we got to know people, the less we liked them.”

Lazy guests always come as a shock. Most hold down jobs. They earn salaries, presumably for doing real work. But once they cross your threshold, a salt-air-induced lethargy overcomes them that neither caffeine nor guilt can overcome. They lounge. They chat. They pull out ukuleles. They sneak off to nap while other people watch their children.

A housewarming present buys some goodwill. Martha Stewart suggests Japanese tea canisters. I prefer a gallon of gin. Two gallons if you bring a pet. One of Eileen’s guests, who brought his dog, was polite enough to carry baggies to collect the poop. Not content merely to clean the yard, he scoured the entire peninsula: old poop, new poop, droppings, dung, manure, guano, scat. Each new artifact he presented to Eileen with curatorial pride, asking what she wanted him to do with it. (She was too nice to say what she really thought.) The island’s first Excrement Museum grew in the garbage under the sink.

Family can be worse than dogs. Dan, Eileen’s husband, dreads the “relatives who come visit and there’s a big dinner and everyone drinks too much and says things they shouldn’t, like ‘If that’s the way you feel, I’ll just leave,’ only then they can’t find their way back to their rooms.”

Of course, half of all conflicts could be eliminated, if people would just stop eating. (Produce is scarce on the island and costs the moon.) My friend Betsy, who was on a spcial diet, laid down the law when she woke to find a little girl sticking her expensive organic raspberries on her fingertips and popping them in her mouth. On the counter lay a $2 Gala apple with a single bite out of it. “I don’t want your food,” she told her guest, “so don’t eat mine.”

Some people are honest about food. We hide it.

Last summer, I caught my husband, a tenured college professor, hiding a secret stash of Toll House cookies on the top shelf. The next morning, my daughter Madeline was climbing the countertop, rearranging cereal boxes.

“What are you doing?” I asked, figuring she’d discovered the cookies.

“Just checking if we have enough flour,” she announced in a stagey voice.

“Mom,” Madeline held her finger to her lips with a warning glare. “Don’t say anything.”

Behind a bunker of Special K, she’d hidden a half-eaten jar of Nutella.

It’s not that we don’t like our guests. We love our guests. But they bring out the worst in us, exposing our stingy selves.

Eventually, one fine day, the guests go on their merry ferry way. We stagger home, suffering from post-traumatic guest disorder (PTGD), whose symptoms include incessant yawning, a sense of dislocation, and an inability to cook, clean, or hang up wet towels.

At night, sufferers of PTGD endure dark, twisted dreams. The entire ferryboat is spending the weekend. Children wielding melting popsicles roll across your grandmother’s claw-foot couch. Everyone is hungry, but you only have three eggs and a loaf of Pepperidge Farm Hearty Oatmeal Bread. You’re out of toilet paper. The dishwasher breaks. Someone wants to play tennis. Someone wants to open a lemonade stand. Someone needs a bucket to dig for clams. Voices rise. Questions swarm. Where is the salad spinner? Do you have decaf tea? I need a Band-Aid. Is this a tick bite? When is low tide? Do I need shoes? What time is it? I can’t find my black shorts. Where’s the bug spray? Have you seen my mother? Flush.

You wake up, sweaty and shaken. The wind is blowing the white cotton curtains and there is just your family. Four people. Three of whom are sleeping. Maybe I just need more time alone than most people. Silence. Simplicity. Enough quiet to hear the birds. Maybe I wear myself out trying to make other people happy.

The best cure for PTGD is reciprocity, the polite word for revenge. After nine guests left last summer, we dressed up in cocktail finery and set out to trash Dan and Eileen’s house. At their backyard soiree, I poured myself six glasses of wine and lost them all. I left hors d’oeuvre plates gummy with ketchup on bookshelves. I lounged. I chatted. I wished I had a ukulele. When we bid adieu, dishes were piled in the sink. Ice cream puddled on the counter. The kitchen was littered with cracked lobster shells. Peter smiled sadistically. “Dan. Is there anything I can do?”

We laughed, double-kissed our hosts, and drove away as fast as we could.

Of course, we could just say no. We love you, but you can’t come stay with us. Betsy politely refused  three sets of guests last summer. One friend persisted, “Don’t worry. We’re no trouble at all.”

Betsy smiled. “So I said, ‘But I will feel like I need to hostess. Feed you and entertain you. Since I haven’t worked through my issues, you can’t come.’”

There’s only one hitch. When I stand on the bluff overlooking the beach and gaze down at my friends wading, and the pale blue Camden Hills spread before them, joy overwhelms me. It is intensely satisfying to share a place you love, seeing the landscape through fresh eyes, offering the island’s beauty like a gift. In these moments, I see how lucky I am and how petty I can be. It’s more fun to share. I know this. But it’s good to be reminded.

Besides, some guests are downright heroic. Eileen’s Best Guest Ever stripped down to her bra and panties and dove overboard from a moving sailboat to get back to the house to prepare food for that night’s party: She whipped up five lasagnas, a root casserole, and homemade chocolate truffles.

I looked at the spread, amazed. “Your guest made chocolate truffles?”

Eileen raised her eyebrows, grinning. “I’m selective now. I do interviews beforehand: ‘What are your particular talents?’”

Following suit, I’ve raised our entrance exam. Before our last crew’s arrival, I emailed a scavenger list of items: a scrub brush, a blueberry pie, tequila, and cilantro. They brought it all. They also did the dishes, hung the laundry, and cooked a lobster dinner. What can you do with guests like this?

You ask them back.

Lili Wright teaches English at DePauw University and is the author of the memoir Learning to Float.