Musher Ashley Patterson says the Can-Am Crown is the most physically and mentally challenging dog sled race in the East. Sub-zero temperatures and deep snow are just the beginning.

Ashley Patterson, 29, and her team of Alaskan huskies have been training since September for the toughest sled race in the eastern U.S. — the 250-mile Can-Am Crown International Sled Dog Race in Fort Kent on February 28 (can-am-crown.net). Over the course of nearly three days, Patterson will mush up to 65 miles at a stretch, taking breaks every two to three hours to rest and feed her dogs. The owner of Lone Wolf Guiding Services in Shirley with her husband, Mark Patterson, Ashley has been mushing since age 12. Her dream is to enter the 1,000-mile Yukon Quest.

You’re an old pro at this — haven’t you done the Can-Am 250 three or four times before?

Yes, I did it for the first time when I was 18 and a handler at Mountain Ridge kennel in Shirley. I was just doing it for the fun of being out there, and I ended up placing fourth. Those dogs were in amazing shape — they were literally trained for the Iditarod.

This year will be the first time I do it with all of my own dogs — dogs that I have raised from puppies, built bonds with, and built mileage with. We’ve put on 1,500 to 2,200 miles per dog since August or September. Most of our dogs are from the same bloodlines as the dogs I raced when I was 18 — it’s been a really long investment.

How many dogs are on your team?

Twelve. Last year, we entered three teams and did very well. My husband, Mark, and our good friend and sponsor, Amy Duggan of Mountain Ridge, both did the 30-mile race. She placed fifth and he placed seventh. I did the 60-mile race and placed seventh.

I never have wanted kids, so I guess I’ve made up for it in dogs!

Wait — you entered three teams? How many dogs do you have?

Are you sure you want to know? I never have wanted kids, so I guess I’ve made up for it in dogs! We have 36 adults on our core team. We also have 16 puppies, all under a year old. They all have names, of course. When we have litters of puppies, we name them according to themes. We currently have two litters — one litter is named after award medals, and the other is named after musical instruments. The leaders on my A team are brothers named Owl and Eagle. Of course, you have to pick names you can say when your lips are cold!

What is the most challenging thing about the Can-Am 250?

Deep snow makes the trails really slow going, and that’s hard mentally on a musher. Sometimes you’re so tired and you’re going so slow that you want to give up. Plus, the deeper the snow, the more those pesky moose want to stay on the snowmobile trails. They make holes that are two-, three-, and four-feet deep. The dogs fall into these holes, and their muscles get sore.

What distinguishes the Can-Am from other races?

Hilly, hilly terrain and wide open areas like potato fields, where the snow is constantly blowing in your face. You have to squint and depend on your leaders not to do something foolish.

What’s the most important thing you take with you?

My handmade beaver mittens. They’re the warmest mittens I’ve ever had. Anything that is natural fiber, like my mukluks that are made out of moose hide, works great in the cold. I have a huge investment in clothing. It all starts with having the core of your body warm, and the Northern Outfitters bib overalls work the best because we women have to figure out how to urinate on the fly! 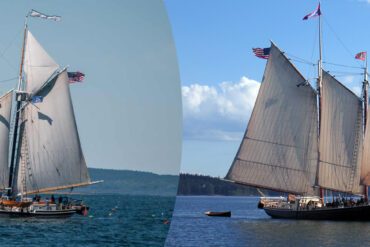