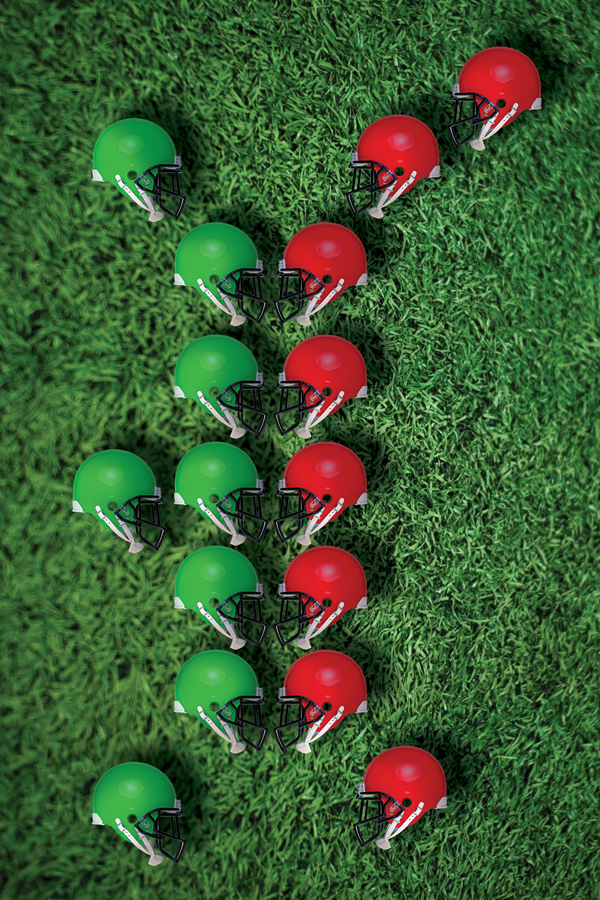 The varsity blues have afflicted some of Maine’s high-school pigskin squads lately, with declining student enrollments and football participation making it tough to field enough players. So, this year, 10 schools are playing a shrunk-down version of the game, 8 vs. 8 instead of the usual 11 vs. 11. “It’s still football,” says Eric Lane, head coach at Traip Academy, in Kittery. “It’s just fewer people.”

The alternative, Maine Principals Association executive director Mike Burnham says, was for teams to either fold or merge. “These schools wanted to maintain their own football identity,” he explains. This way, the kids still get to play. It’ll just look a little different.

Mt. Ararat, Gray–New Gloucester, Yarmouth, Ellsworth, and Maranacook will compete in one division and Boothbay, Old Orchard Beach, Sacopee Valley, Telstar, and Traip Academy in another, with division winners meeting in a November title match.

The schools’ fields will shrink from about 53 to 40 yards wide, but the lengths will stay the same — because those goalposts at each end zone are anchored in the ground.

Offenses will probably use three linemen, instead of the usual five, and wind up with one less receiver or running back. If defenses want to control the line of scrimmage, they’ll sacrifice support
deeper down the field.

No matter how defenses line up, Lane says, the eight-man game will feature less resistance between the ball and the end zone. Fans can expect high-scoring games.