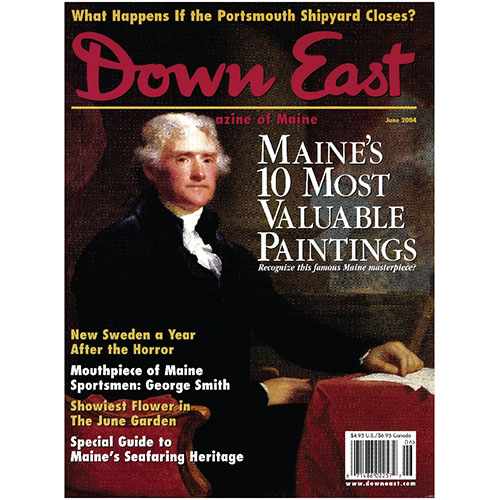 New Sweden was rocked by the terrible events of early last year, but as a community it remains unshaken. By Jeff Clark.

Each June in gardens across Maine — and even in one Auburn middle school cafeteria — the state’s iris growers put on a spectacular display. By Richard Grant.

Even though it’s impossible to peg the precise value of any work of art, clearly some paintings in Maine museums are worth considerably more than others. By Edgar Allen Beem.

I’d Rather Be Fishing

That’s what George Smith claims when he  isn’t leading the fight to keep bear baiting legal in Maine. By Gerry Boyle.

You’ll want one if you ever do battle with the towering, noxious plant Mainers call bamboo. It’s not really bamboo, but  it is virtually indestructible, as homeowner Nancy Comiskey found out.

Once More to the Lake

A Bay State couple has built a versatile vacation home on a lake in Acton they’ve loved for years. By Michaela Cavallaro.

For many Mainers, the most eagerly awaited spring tonic is rhubarb. By Ken Textor.

When Franklin Roosevelt was secretary of the navy he had some mighty ideas about how Passamaquoddy Bay could serve the nation, as an early photograph suggests. By Joshua E Moore.

A first-ever guide to the places all over Maine that celebrate the state’s prominence during the Great Age of Sail. In addition to the state’s two preeminent maritime museums — at Bath and Searsport — dozens of other lesser-known sites brim with artifacts and stories from the swashbuckling days of yore.

Opinions and musings on why you may need to make your own bed this summer, a surprising new business in Rumford, and a climate shift along the coast.

The Talk  of Maine: Thinking the Unthinkable

So much energy is going into saving Portsmouth Naval Shipyard from the next round of  military base closings that no one is exploring the alternatives. By Jeff Clark.

The federal government is sharply reducing Acadia’s budget, even as the park becomes more popular, according to an editorial from the Bangor Daily News. Also, opinions on the soaring cost of ambulance service, a scandalous case  of sexual McCarthyism in Augusta, and the prospects for putting a liquefied natural gas terminal on Sears Island in Penobscot Bay.

Inside Maine: A Natural Wonder

Foggy, boggy Great Wass Island is one of the state’s most special places, especially at this time of the year. Plus the inside scoop on an ice-cream stand in York, a garden tour in the Forest City, a brand-new hike in Acadia, and a new system of exit signs on the turnpike. By Andrew Vietze.

This romantic restaurant owes its success to its owners’ own romance. By MonicaWood.

Down East  Bookshelf: A Peck of Poets

Picking the best Maine poetry is a thorny task, as a new anthology proves. By Mark Melnicove.

I Remember: Maggie versus Joe

In 1954 I  fell in love with Margaret Chase Smith’s Maine. By Raymond J. Blair.

Cover: Porhait of Thomas Jefferson, by Gilbert Stuart, courtesy of the Bowdoin College Museum of  Art. While Jefferson was certainly not born here, this eminently famous portrait has resided in Maine for nearly 200 years.