More Than a Store 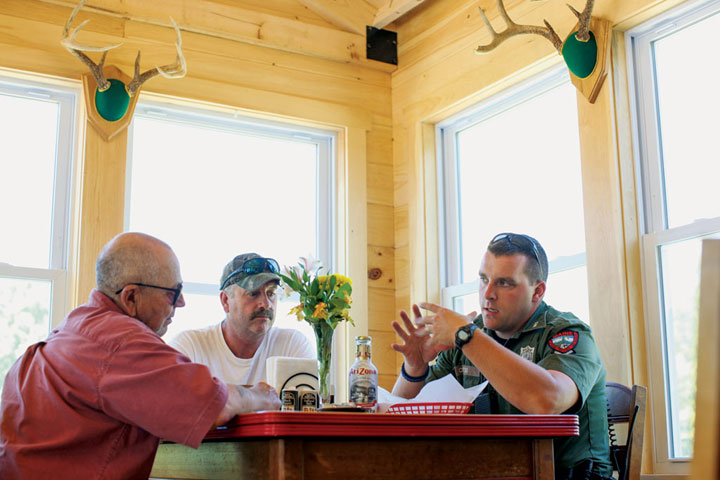 The Fox Hill General Store in Wesley serves good food with a heaping helping of hospitality in the Down East woods.

By Jane Crosen
Photographs by Jason Smith
There’s a fisher poised on a log, its small brown ears alert for prey, a glinty-eyed bobcat stepping hummock to hummock, a silvery young coyote. And look, there’s a huge bull moose and, tucked under his bell, a reclining red fox. Here’s a sniffing bear, a furtive raccoon, twin five-point bucks, mallards taking flight, and outshowing other colorful displays, a ruffed-out tom turkey in all his red-wattled glory. Here inside Fox Hill General Store and Snack Bar in Wesley, it feels like we’re deep in Maine’s North Woods.

Make that the Down East North Woods. Midway between Beddington and Calais, Wesley is the home of the legendary late-nineteenth-century hunter, guide, and poacher Wilbur Day, whose grave in nearby Day Block Township is a touchstone for hunters who leave rifle shells for good luck. With houses scattered among the few small businesses and deserted motels strung out along The Airline (Route 9), the town may seem like an empty pass-through for truckers and tourists, but Wesley has a solid sense of community and history, not to mention natural resources. The town is the back-door entrance to one of Maine’s largest conservation easements — the Sunrise Easement, held by the Downeast Lakes Forestry Partnership and covering 342,000 acres of private working forest that is open to multiuse recreation — and it is bracketed by the Machias and East Machias River watersheds and includes several lakes and protected salmon and trout tributaries.

It was this “touch of wildness” that pulled the Fox Hill General Store’s new owner, Tina (Athena) Ross, from the Camden area to Wesley, where she bought a camp on Long Lake in 2003. She loves wildlife, not just to hunt (mostly deer), but also to watch. “It’s an animal heaven up here,” she says. And the people were friendly, genuine. The more she came to the area, the more the community drew her in, and by 2010 she was living in Wesley year-round.

Soon after, Tina learned that the Fox Hill General Store was closing. It was the unofficial successor to the Cloud 9 store and diner in Day Block Township, a community store-cum-coffee-parlor run for decades by Wilbur Day’s nephew, Pat Day, and almost as iconic as Wilbur himself. After Pat died in 2002, Camille and Ivan Hawkins continued the tradition by opening a little store with gas pumps next to their farmstead on Fox Hill. They filled the intimate little shop with locally made gifts, crafts, and foods, and a little of any essential that would save a trip to Machias. One or two folks were always parked in Camille’s hospitable chairs for a neighborly chat. (On occasion I’d be one of them, stopping in to pick up ice for our camp cooler, catch up on the local news, and peddle my hand-drawn Down East maps.)

When Camille decided to shut down the store, Tina thought, “What are we going to do?” Folks needed gas and supplies, as well as a place to congregate. “I can do this,” she told herself. She bought the store and oversaw a modest but tasteful renovation for the 2012 season, adding a snack bar (taking a cue from the Airline Snack Bar, some twenty miles west in Beddington). Drawing on lessons of success learned from her previous employer at Fitzpatrick’s Deli in Camden, she decided to start small, offering a limited but good menu and a positive atmosphere.

Open for breakfast and lunch, the Fox Hill snack bar serves up daily specials along with house favorites. Breakfast standbys include the Wilbur Day Special: “Poached” Eggs on Toast (get it?), Tinker’s Breakfast (named for a Cloud 9 regular who migrated over to Fox Hill), and Tina’s corned beef hash. Lunch specials include meatball subs, burgers (chicken, salmon, fish), and the Down East Warden’s Special (chili and cornbread). Everything is made from scratch.

Except for the bread, which is handmade locally, Tina does all of her own baking, including cookies, muffins, and pastry “burritos” with fruit fillings like apple or mincemeat. Her beef mincemeat, made from the Cloud 9’s recipe (courtesy of Pat Day’s daughter, Debbie, who helps at the store) is sold by the jar, along with other Maine-made specialty foods and healthy snacks, books, and gifts. Tina’s newest offering, made with her granddaughter, Jayda, is ice cream in cherry, blueberry vanilla, and other flavors packed in grab-and-go cardboard containers.

The atmosphere is a charming blend of rustic North Woods and homey cafe. Peeled-log shelves keep company with vintage tables and chairs. The kitchen area is open to the newly expanded dining room so that Tina can tend to her customers’ needs and join in the conversation. The place is clearly the heart of the community. Residents have thanked her for keeping it going — especially the older folks, who are grateful to have a place to socialize.

“The community is incredible,” says Tina. “The people are so supportive. If not for the local people, I couldn’t have made it year-round.” She is busiest during the summer, with a steady flow of Canadian tourists and camp owners, and through the fall, especially during bear season. The store serves as a tagging station, and one of her regular customers is game warden Alan Curtis, a celebrity recognizable from his appearances in Animal Planet’s North Woods Law. Other regulars include forest rangers, loggers, wilderness guides, and people en route to jobs in construction, the Jasper Wyman and Son blueberry processing plant, and the Woodland paper mill. “There’s a lot going on around here — a lot of camps,” Tina says. “And a lot of work for people willing to work.”

Besides Tina’s home-cooked food, hearty laugh, and hospitality, the Fox Hill General Store’s most compelling attraction is her collection of some sixteen wildlife mounts in natural poses, beautiful examples of taxidermy surpassing anything behind glass at the Maine State Museum. Tina hunted most of them herself. “I have a lot of respect for the animals and love displaying them.”

One gets the feeling that old Wilbur, called back to life by the menu board in his honor, might be tickled to discover that such an inviting place — full of trophy antlers, fellow hunters, and good eats — has sprung up in his stomping grounds and become one of Fox Hill’s regulars.

Jane Crosen is a map artist, freelance editor, and author of Maine Mapmaker’s Kitchen: Creative, Healthy Recipes for Home, Camp, and Afloat. She and her husband live in Penobscot and have a camp in Wesley.