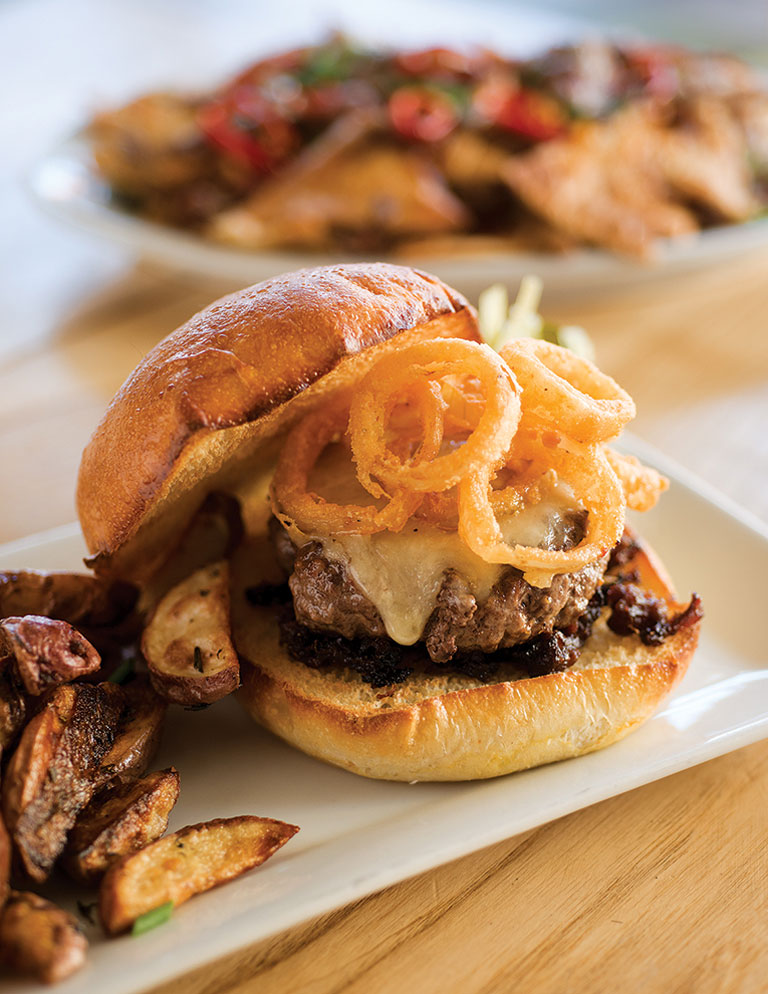 [W]hen the mayor of Rockland comes into FOG Bar & Cafe, he’s usually hungry. Luckily, the minds behind this Main Street spot — Warren Seelig, his wife, Sherrie Gibson, their daughter, Ashley Seelig, her fiancé, Joshua Cardoso, and kitchen manager Jon Vickerman — know exactly what he’s craving. “He likes to drink a North Coast Old Rasputin imperial stout and then he has a medium burger,” Cardoso recites without a hint of hesitation, like it’s a good friend’s address or phone number. “He’s a burger kind of guy,” he adds with a knowing nod. “You can’t let the mayor go hungry.”

But you don’t have to be the mayor (or even a regular) to dine on something fresh and indulgent at this New American restaurant about to celebrate a year and a half in the heart of downtown. All you have to do is step inside.

The Gibson-Seelig family purchased the FOG property upon moving to the midcoast in 1995. They gutted the building and Gibson opened The Black Parrot, a clothing boutique that’s still next door to the restaurant. Their first tenant in the building’s remaining space was Rock City Coffee (originally the Second Read), a longtime Rockland establishment that remained there for 16 years. By the time Rock City moved to a new location in 2011, Ashley Seelig had returned to Maine from New York City with Cardoso (both are visual artists who met while studying at New York’s Cooper Union). With the search for a new tenant underway, Ashley began to wonder: why couldn’t the family start their own restaurant in the space?

“I walked in here myself, then with my mom, then with Josh, and then with my dad, and I went, ‘If I don’t do this, I am going to kick myself for the rest of my life,’” she recalls.

Without further ado, the family leapt into a yearlong renovation of the former Rock City digs. The result of their efforts is a cavernous interior with high ceilings, soft gray walls, a subway-tiled bar, and reclaimed blonde wood furniture built by Warren (who maintains a professorship at Philadelphia’s University of the Arts and a woodshop/art studio beneath FOG). Strings of garden lights stretch across the ceiling and candles flicker on the tables. A projector screens black-and-white movies high up on the restaurant’s back wall. The brightest element of the whole place is the outdoor sign, its three bright letters glowing boldly in the heart of the city.

The name FOG was a suggestion from Warren — a nod to the mist that often cloaks coastal Rockland. It’s also a tribute to the restaurant’s evolving nature. “We didn’t want to define [the restaurant] too quickly because I felt like this was the kind of place that was going to grow depending on what Rockland needed,” Ashley says.

Once the doors opened in October 2012, the team had their chance to begin that evolution.

“In the beginning we froze a little when people were like, ‘What kind of food do you have?’” says Gibson, now a co-owner with Ashley. But after nearly a year and a half in business, the team has sharpened their vision. “It’s an American version of a bistro,” Ashley says. “American favorites that have a little tweak to them that reflect the way people eat now.”

Like its meteorological namesake, the menu at FOG Bar & Cafe is always shifting. Kitchen manager Jon Vickerman, hired in early 2014, is a Portland restaurant vet and a mushroom farmer. He’s also the creative force behind chalkboard menus with specials that change frequently. A dish you rave about in April may not be around in May, but it’s safe to say Vickerman’s kitchen will replace it with something just as delectable. These ever-changing specials make a point of capitalizing on seasonal flavors, from fresh summer meals (pan-fried, cornmeal-crusted haddock with spicy cheddar grits and a radish­­­­–­­green tomato relish) to warm autumn comfort food (a pork chop with apple, fig, and sweet onion jam and butternut squash späetzle).

Diners can also order from the restaurant’s anchor menu, a tried-and-true collection of starters, salads, burgers, and small plates available year-round. Shareable small plates include herb and cheese popcorn, roasted cauliflower mac and cheese topped with buttery brioche breadcrumbs, and duck wings so tender and flavorful on their own that the sauce (you can choose from three types) truly is just gravy. Duck nachos are another popular starter, an update on a classic bar snack with house-made flour tortilla chips, blackberry-apple-thyme marmalade, melted cheese, and Fresno peppers for a kick of heat and fresh crunch. This menu is also studded generously with vegetarian and gluten-free options, and some dishes fall under both categories. The apple, Opus 42, and baby greens salad is one such plate — with tender, bitter greens playing nicely against sweet apple slices and generous chunks of Opus 42, a tangy, crumbly cheese from Lakin’s Gorges Cheese in Rockport.

End the meal with a perfectly portioned dessert, like the Meyer lemon curd soufflé, served with tart raspberry sauce and an airy dollop of Chantilly cream that melts, ever so slightly, into the warm lemon curd below. Or satisfy your sweet tooth with a dessert wine or top-shelf liquor from FOG’s nightcap menu.

The bar menu on its own is also impressive, with a cocktail list that’s refreshed a few times each season and a beer list that changes even more quickly. “We print beer menus twice a week at least,” says Cardoso, FOG’s beverage manager. “They’re never up to date for more than a day anyway.” That’s because Cardoso seeks out and offers beers that have earned high marks for taste from independent sources like RateBeer.com and Beeradvocate. Thanks to Maine’s burgeoning craft beer industry, many of his selections originate close to home — kegs from Maine Beer Company, Rising Tide, and Oxbow are frequently on tap. Other brews are sourced from across the country and globe, from Pennsylvania’s Weyerbacher to California’s Lagunitas and European breweries, too. “We don’t try to serve beers that are wildly experimental or anything,” Cardoso explains. “We want to have a broad selection of proven excellent beers.”

The members of FOG’s team bubble over with words to describe their food-and-drink philosophy (“melting pot,” “excellent but accessible,” “indulgent yet totally comfortable”), but in most ways this restaurant speaks for itself. It’s a place where you can polish off a plate of duck confit and, minutes later, scrawl a bawdy song lyric or confession of love on the chalkboard walls of the restrooms. Look for the intersection between upscale dining and neighborhood-joint vibe, and FOG will be there, its cheerful, painted windows and old-fashioned sign beckoning you inside.